On National American Beer Day 2020, Here's a Brief History of Beermaking and Brewery in US

Do you know that US is among the biggest craft beer producer in the world today? Along with UK, US sees an increase of 10% in the number of craft breweries every year. But let us delve a little into the brief history of beer making in America. 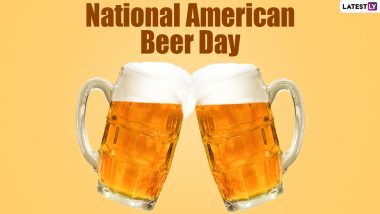 Happy National American Beer Day 2020! Celebrated every year on October 27, this annual observance honours the beermaking industry in the country and takes pride in the rich beer brewing history here. Do you love chugging on beer pints? Then this day is just the perfect excuse to have an extra glass or a pitcher and enjoy the celebration. Do you know that US is among the biggest craft beer producer in the world today? Along with UK, US sees an increase of 10% in the number of craft breweries every year. But let us delve a little into the brief history of beer making in America.  Did You Know Beer Is Close Relative of Marijuana? 10 Interesting Things About the Age-Old Beverage Every Beer Drinker Should Know.

The beer brewing dates back to the 15th century when Native Americans brewed beer using corn. They used corn, birch sap and water in ferment the beverage. The colonists in Virginia were also making similar beer. Brewing beer was one of the main occupations in the colonies. The first brewery in the New World opened in New Amsterdam (present day Manhattan) in the year 1612. Dutch explorers Adrian Brock and Hans Christiansen were the ones who started the beginning of something great to follow. From Mood Enhancer to Natural Sleep Aid, 7 Reasons That Make Beer the Best Alcoholic Beverage of All!

In the year 1848, as more citizens began coming to America to escape the war, they brought with them preferences of different taste. These German brewers played a role in changing beer brewing in the coming decades. In the next 30 years, by 1873, there were more than 4,100 breweries in America. Industrialization and urbanization accompanied with technological advancements and also more people coming in from beer-drinking countries, beer started becoming popular drink in America. Brewing turned into a career for many and it saw great success.

While things were flourishing for the industry, it suffered a setback with the passing of the 18th amendment. It made production and distribution of beverages containing more than 0.5% alcohol by weight illegal. Breweries closed shops and there were many losses in terms of finance. But some decided to stay and look for alternative. They made a "near beer" malt beverage with a flavour very similar to beer and having less than half a percent of alcohol as per the laws. Not everyone was impressed by the product but it did give a chance for the brewers who stayed.

In 1933, beer was re-legalised and wine with 3.2% alcohol by weight. With the 21st amendment officially ended the prohibition and industry boomed again. The first canned beer was introduced by The American Can Company in 1935. After a initial hurdles, the industry picked up pace.

After the World War II, the total number of breweries fell but the larger breweries grew profitable. But there was a rising demand for beer and thus more people started entering in. The 1970s even saw a microbrewery movement. There were new offerings and products in the market and consumers were happy to have new tastes. By 2000 there were more breweries in US than any other country.

(The above story first appeared on LatestLY on Oct 27, 2020 03:01 PM IST. For more news and updates on politics, world, sports, entertainment and lifestyle, log on to our website latestly.com).