Thrissur Pooram at the Vadakkumnathan Temple, is an annual festival celebrated in Kerala. The Pooram will be held on Tuesday, May 10 merging the spiritual and cultural essence of the state. The two-centuries-old festival of Thrissur Pooram was originally conducted after the edict of Raja Rama Varma who was the powerful ruler of the erstwhile Cochin. 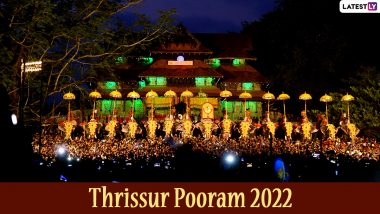 Kerala, God's own country is widely known for its incredible traditions and unique temples. Every year the state celebrates its temple festival which is marked as Thrissur Pooram at the Vadakkumnathan Temple, an ancient Hindu shrine dedicated to Shiva in the city of Thrissur. The annual festivity has been going on for more than 200 years in the state and is observed on the day of Pooram day. On this occasion, the moon rises with the Pooram star in the Malayalam Calendar month of Medam. Thrissur Pooram 2022 will be held on Tuesday, May 10 merging the spiritual and cultural essence of Kerala. The massive observance is conducted by two groups of temples, Paramekkavu and Thiruvambadi. To know in-depth about the rituals, history and celebration of the long-established festival, continue reading. May 2022 Holidays Calendar With Major Festivals & Events: Eid ul-Fitr, Akshaya Tritiya, Mother's Day, Buddha Purnima; Check Date Sheet of All Important Dates And Indian Bank Holidays for The Month.

The two-centuries-old festival of Thrissur Pooram was originally conducted after the edict of Raja Rama Varma who was the powerful ruler of the erstwhile Cochin. The grand Pooram was first organised by the participation of ten holy temples of Paramekkavu, Thiruvambadi Kanimangalam, Karamucku, Laloor, Choorakottukara, Panamukkampally, Ayyanthole, Chembukkavu, and Neythilakavu.  Raja Rama Varma invited shrines with their deities to the city of Thrissur to pay obeisance to Lord Vadakkunnathan also known as Lord Siva, who is the presiding deity of the Vadakkunnathan Temple.

Since, then every year the magnificent festival displays caparisoned elephants, decorated with dazzling parasols, strikingly crafted Kolam in bright colours, bells, and ornaments. The activity starts at 6:30 in the morning. The goddesses of Thiruvambadi and Paramekkavu are believed to be taking part in the Pooram. The grand celebration also has percussion music with rounds of brilliant pyrotechnics. There are two rounds of pyrotechnics. The first, Sample Vedikettu, happens on the fourth day after the flag hoisting of the Pooram while the second is held on the main day of the Pooram celebration.

(The above story first appeared on LatestLY on May 09, 2022 03:55 PM IST. For more news and updates on politics, world, sports, entertainment and lifestyle, log on to our website latestly.com).