Vishwakarma Puja 2019 Date and Puja Vidhi: Know Significance and Shubh Muhurat to Celebrate The Festival of Hindu God of Architecture

Vishwakarma Puja or Vishwakarma Jayanti is an important festival observed by the Hindu community. Vishwakarma, the Lord of creation is worshipped on this day. 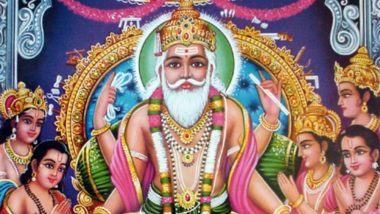 As the observance falls on Kanya Sankranti of the Hindu calendar every year, Vishwakarma Puja generally falls on September 17. Vishwakarma is believed to have constructed the holy city of Dwarka, where Krishna ruled, as well as the Palace of Illusions or Maya Sabha for the Pandavas. He is first mentioned in Rig Veda and is credited with Sthapatya Veda, the science of mechanic and architecture. It is believed that Lord Vishwakarma created weapons for the gods including the King of God Indra's Vajra for which is called the divine carpenter.

According to Drik Panchang, Vishwakarma Puja Sankranti moment will be at 01:19 pm on September 17 (Tuesday).

Vishwakarma Jayanti is of much significance among those who work in shops, factories and industrial areas. The day holds significance among not only engineers and architects but also craftsmen, factory workers and mechanics. Workers pray to Lord Vishwakarma for better abilities and functioning of their tools. People install new photos and statues of Vishwakarma in workplaces and offer special prayers.

(The above story first appeared on LatestLY on Sep 16, 2019 06:59 PM IST. For more news and updates on politics, world, sports, entertainment and lifestyle, log on to our website latestly.com).