When is Pateti 2020? Date, Significance, History and Rituals of the Parsi Observance That Falls Ahead of Navroz or Parsi New Year 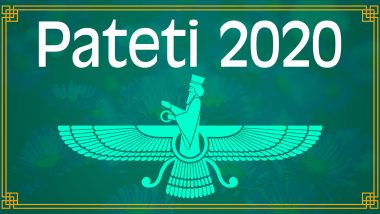 Pateti is an observance of the Parsi community which falls ahead of Parsi New Year also known as Navroz. Ahead of Pateti, people have taken to the internet asking 'When is Pateti 2020?' If you are looking for the right date and rituals of the day, then we have you covered. Here, we bring to you Pateti 2020 date, its significance, rituals and history of the observance. On Pateti, Parsis repent for their sings and wrongdoings of the year gone by. The day is believed to cleanse and purify your mind and begin afresh on the next day which starts a new year. Pateti comes from the word ‘Patet’ which means repentance. Parsis wear new clothes on this day and visit the Fire Temple and pray for repentance, prosperity, health and wealth. As the day is meant for asking for forgiveness, one should not wish on the day. The next day which is Navroz, people send wishes saying 'Navroz Mubarak' or 'Happy New Year'. Pateti 2020 falls on August 15 and Navroze is observed on August 16. Parsi New Year 2020: Know The Difference Between Pateti And Nowruz, Send Traditional Wishes and Greetings and Learn More About the Festival.

Parsis clean their homes and decorate them with rangoli and flowers. Traditional breakfast is served and special sweets and dishes are prepared for lunch and dinner. Other customs include sprinkling rose water on visitors as they enter the home and giving donations to charity. Growing wheatgrass is one of the most common traditional practices for Nowruz.

When a person stands in front of the Holy Fire with humility and seeks repentance for all his past sins after saying the holy Patet Pashemani prayer, they are believed to have been cleaned of their sins. After which the next day they wish 'Navroz Mubarak' with a fresh approach to life. The act of repentance is said to purge the mind, body and soul. Parsi New Year 2020: Significance of Pateti and Why You Should Not Wish ‘Pateti Mubarak’ Ahead of Nowruz Celebrations.

Food plays a critical role in Parsi celebrations.  Both vegetarian and non-vegetarian delicacies like Sali Boti and Lagan Nu Custard are prepared on this day. Parisis who are originally from Persia follow Zoroastrianism. It was founded by Zarathustra in Persia. Navroz is also known as Jamshed-i-Nouroz after King Jamshed, the Persian King who introduced the Parsi calendar.

(The above story first appeared on LatestLY on Aug 14, 2020 12:08 PM IST. For more news and updates on politics, world, sports, entertainment and lifestyle, log on to our website latestly.com).