Weight Loss Tip of the Week: How to Use Turmeric (Haldi) to Lose Weight

Turmeric, which is commonly known as Haldi in India is the most commonly found ingredient in Indian kitchen. 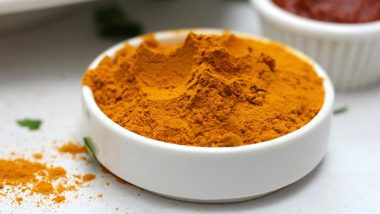 Turmeric, which is commonly known as haldi in India, is a spice that imparts a golden colour and a deep flavour to your food. It's considered a superfood, which can fight inflammation and cancer. It has powerful antibacterial qualities and is used as an antiseptic in the country for scrapes and wounds. Apart from these uses, turmeric can also be used to lose weight. Turmeric Health Benefits: Fighting Cancer, Preventing Diabetes and Other Reasons Why You Should Have This Curcumin-Rich Spice.

Turmeric is a flowering plant whose scientific name is Curcuma longa. It is a part of the ginger family. According to the National Institute of Health, the active ingredient in turmeric, curcumin, is known to have an antioxidant, anti-inflammatory feature along with anti-obesity potential which can help in weight loss.

How Turmeric Can Help in Weight Loss

Curcumin is an antioxidant and anti-inflammatory ingredient found in turmeric with weight loss benefits. According to a study conducted by researchers at Tufts University in 2009, curcumin slowed weight gain in mice by preventing new fat tissues from forming. When mice were fed with turmeric it prevented them from developing new blood vessels and less fat tissue. The study also revealed that mice who were fed with this anti-oxidant agent had less fat in their livers and lower cholesterol levels than mice who weren’t.

As per the latest study conducted by The Journal of Nutritional Biochemistry, Korean scientist identified that curcumin induces browning in white adipose tissue. There are two types of adipose tissues -- brown and white. White adipose tissue stores energy and increases with weight gain. On the other hand, brown adipose tissue produces heat by burning fat. Curcumin in turmeric stimulates the production of mitochondria which converts sugars, proteins and fat into energy.

How to Use Turmeric for Weight Loss

In Indian cuisine, turmeric is used extensively in food. But if you want to supersize your intake and reap the benefits of turmeric, you can eat the rhizomes raw as part of a salad or pickle or brew a tea from turmeric powder. Here's how.

It must also be noted that turmeric is not the only solution for weight loss. Fat loss and healthy body highly depend on how you manage your lifestyle in 24 hours. Your sleep intake, diet and exercise play a crucial role in overall fitness.

(This article is written for an informative purpose and should not be substituted for medical advice. Kindly consult your doctor before trying any tips.)

(The above story first appeared on LatestLY on May 26, 2019 08:01 AM IST. For more news and updates on politics, world, sports, entertainment and lifestyle, log on to our website latestly.com).