Amul Creates Topical Ad on Inflated BEST Electricity Bill in Mumbai Asking if You Were 'Electricked?' 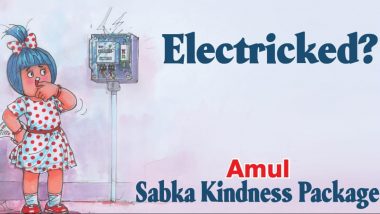 Exorbitant electricity bills gave mighty shocks to Mumbaikar last month during COVID-19 pandemic. Many took to social media platforms complaining to electricity boards about errors in the billing system resulting in unbelievable bills. As various electricity boards tried to explain the cause of the high bills, funny memes and jokes on it started surfacing online. And now Amul, the Indian dairy brand has posted a topical ad on the issue. The ad shows Amul's mascot girl standing next to an electricity meter wondering what happening holding the bill in her hand. It reads 'Electricked?' and at the end 'sabka kindness package' (the kindness package for everyone) referring to Amul. Got a High Electricity Bill This Month? These Funny Memes and Jokes Will Help You Fill The Hole in Your Pocket With Humour.

Amul shared the ad on Twitter with the caption, "#Amul Topical: Controversy about inflated BEST bills in Mumbai ..." referring to Brihanmumbai Electric Supply and Transport. And the ad was quick to go viral making Twitterati super impressed. People commented on it saying that Amul knew the heart of people and would always come up with relevant content. Amul is known for coming up topical ads often playing with words showing off their wit and humour. From topics of social interest, political news, public issue to everything, Amul always manages to be on the surface of the news. Mumbaikars Feel the Heat of Inflated Electricity Bills, Angry Consumers Question MSEDCL, Adani Power on Twitter.

Meanwhile, electricity boards came up with explanations on why the bills looked inflated this time. Adani Electricity in Mumbai took to Twitter said that the meter services were suspended during the lockdown period for the safety of the customers. Hence, the electricity bills generated were on the lower side, being an average of the preceding three months (bills of December, January and February. Hence, the bills for May looked like a big sum, while it was the right amount.

(The above story first appeared on LatestLY on Jul 06, 2020 09:07 AM IST. For more news and updates on politics, world, sports, entertainment and lifestyle, log on to our website latestly.com).