Can Menstrual Cramps Get You Thrown Out of an Airplane? An Emirates Flight Passenger Was Deboarded After She Complained of Period Pain

A 24-year-old British woman, Beth Evans and her 26-year-old boyfriend, Joshua Moran were asked to deboard from an Emirates flight bound for Dubai after a flight attendant overheard her complaining about period pain. 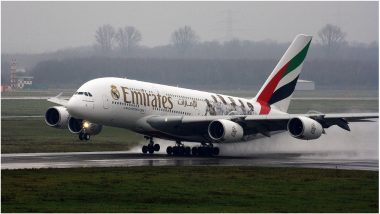 A British woman was kicked out of the plane after she complained of period pain. (Photo Credits: nockewell1/pixabay)

A 24-year-old British woman, Beth Evans and her 26-year-old boyfriend, Joshua Moran were asked to deboard from an Emirates flight bound for Dubai after a flight attendant overheard her complaining about period pain. Just before the flight was scheduled to depart from Birmingham, England on Saturday afternoon, they were booted from the flight. The couple said that a flight attendant overheard their conversation even though Beth said that she rated her pain intensity ‘one out of ten’, according to reports. Commenting on the incident, Joshua told the Sun, “To be kicked off for period pains, it was madness. Beth was in tears and got upset when the hostess was asking her questions. It’s embarrassing to have to explain about period pains when it’s being overheard.”

To the contrary, in a statement Emirates said that Evans and her boyfriend were offloaded because of a medical emergency. The jet’s crew claims that their decision was motivated by the fact that there were no doctors on the flight and they did not want to endanger Beth by delaying medical help had she worsened during the flight. But Evans confirmed saying that she was perfectly happy to take the seven-hour flight before the airline decided otherwise. The couple was forced to leave and pay 350 dollars each to reschedule the trip.

Doctors have slammed the airline’s decision and termed it as ridiculous and stated that menstrual cramps are not a reason to worry while flying. There are no health issues associated with period pains and flying does not cause a concern to worry about. On the airline’s website it states that passengers with certain medical conditions may not be permitted to fly such as those suffering from communicable diseases, uncontrolled seizures or pregnancies past the 36th week. Nowhere period pain is on that list.

(The above story first appeared on LatestLY on Feb 21, 2018 02:23 PM IST. For more news and updates on politics, world, sports, entertainment and lifestyle, log on to our website latestly.com).