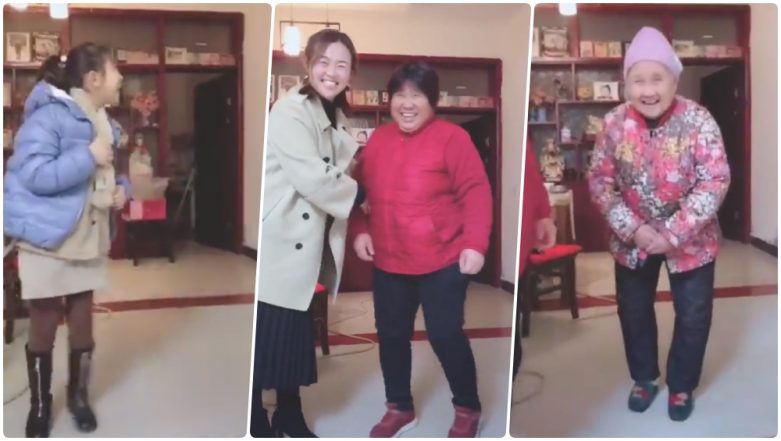 We have entered 2019 and the first cutest meme of the year is already upon us. The beginning of the New Year has shown us many viral videos and memes, but the recent one going viral is melting the netizens’ heart. All thanks to China! The new meme challenge popular as “Four Generations in One Room” or the “Four Generations Challenge” has taken over Douyin, (Chinese TikTok). The videos are going viral so much that it is now on all the global social media platforms including Twitter and Facebook. It’s New Year 2019 & We Already Have 5 Hilariously Viral Videos Breaking the Internet in the First Week.

The Four Generations Challenge is exactly like it sounds. From youngest to the oldest family members appears on the screen under one roof. What’s next? It is possibly the cutest family video ever. First Bizarre Fashion Trend of 2019: Human-Sized Backpacks Is the Latest Fad in Japan (View Pics).

The process repeats for the female members too.

this Chinese four generations meme is so wholesome omg pic.twitter.com/bozR6rB93w

The netizens are already obsessed with the videos and cannot control but outpour their emotions. It is incredible to see all four generations of individuals in the same space, all happy and cute.

Great-Grandparents Are the Cutest.

I want that oldest one to be my grandma... I just want to hug her. pic.twitter.com/S06PJV6rP2

And Some Are Missing Their Grandparents.

This is great and at the same time made me sad, I miss my grandma 😭

China is gaining popularity over the time in terms of making some hilarious possible meme challenges that lit up the intent instantly. To our recent memory, the last one that went insanely viral was in October 2018; the “Flaunt Your Wealth” challenge. It featured rich brats casually falling out of the luxury cars or tripping on the streets, with their expensive belongings flying out their hands around them.

It is just the beginning of the year, and the Chinese people are already up in the game to create the cutest meme ever. We hope the recent four generation challenge will make its way to the rest of the world soon. We can’t wait for more such cute videos to surface this year!