Did You Know, Ganges River Dolphins Are Blind? Know Facts About India's National Aquatic Animal And Where to Spot Various Species of Endangered Beings in India 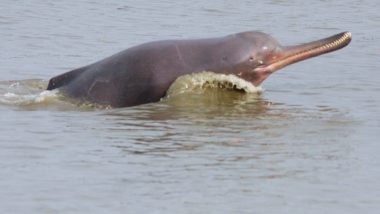 Dolphins, the national aquatic animal of India, are beautiful aquatic mammals known for their graceful jump in the waters. However, the population of these beautiful creatures are on the decline across countries including India. Gangetic dolphins used to be once found in plenty in India but now they come under the list of endangered mammals. The Ganges river dolphin was officially discovered in 1801; it is a subspecies of South Asian river dolphin, the other being Indus river dolphin. They once lived in the Ganges-Brahmaputra-Meghna and Karnaphuli-Sangu river systems of Nepal, India, and Bangladesh. After being in the endangered list for a long time, the species was recently spotted from the ghats of Kolkata, Bihar and Meerut. We take a look at some interesting facts about dolphins, their population, and where to see them in India. Endangered Ganges River Dolphins Spotted in Meerut! 5 Facts About the Blind Mammal That Will Surprise You (Watch Viral Video)

1. The Ganges river dolphin can only live in freshwater and is blind, they hunt by sending ultrasonic sounds.

3. The Gangetic river dolphin is one of the four freshwater dolphin species in the world. The other three found in China, Pakistan and Latin America are now extinct.

4. Ganges river dolphins are listed as Endangered in the IUCN Red List. The overall population is estimated to be between 12,000 and 18,000 in the world. Gangetic Dolphins Spotted From Ghats of Kolkata as Water Pollution Decreases During Lockdown (See Pictures)

5. Ganga river dolphins are an indicator of a healthy ecosystem.

6. The decline in the population of Gangetic river dolphin is due to poaching.

7. Gangetic river dolphins fall under Schedule I of the Indian Wild Life (Protection) Act and have been declared an endangered species by the International Union for Conservation of Nature (IUCN).

8. Bihar is home to around half of the estimated 3,000 Gangetic dolphins in the country.

Places to Spot Different Kinds of Dolphins in India

(The above story first appeared on LatestLY on Aug 15, 2020 11:33 AM IST. For more news and updates on politics, world, sports, entertainment and lifestyle, log on to our website latestly.com).