Google’s Year in Search 2020: – Money Heist, Bigg Boss 14, Mirzapur 2 and More – 5 Shows That Were The Most Searched in India This Year

Google has curated a list of the most searched web shows in 2020. Web shows were a very important source of entertainment during the lockdown. As all cinema halls were shut, OTT platform came to our rescue and many filmmakers presented us with shows and movies that blew our mind. 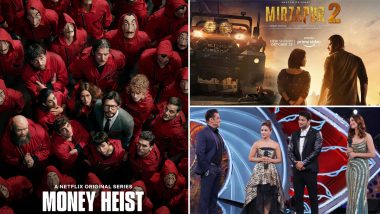 With just a few days left for 2020 to be over, we all know what time it is! Its the time for award functions, a general roundup and a lot of looking back to the time spent in 2020. This year was no easy for anyone of us and while the talk of the town was the pandemic, we were able to survive it because of shows and movies and other sources of entertainment. Some movies and shows became much more popular than others and now have made it to Google's Year In Search 2020 list as well. Google Year In Search: Dil Bechara, Soorarai Pottru, Tanhaji – Here Are The Top 5 Movies Searched In 2020 In India!

Google has curated a list of the most searched web shows in 2020. Web shows were a very important source of entertainment during the lockdown. As all cinema halls were shut, OTT platforms came to our rescue and many filmmakers presented us with shows and movies that blew our mind. The kind of content that was created for us ranged from romantic shows to crime thrillers and we all can admit that we thoroughly enjoyed watching all of them.  Google Year in Search 2020: IPL, Coronavirus, US Presidential Election Among Top 10 Most-Searched News Events in India.

First on the list is Netflix's show Money Heist. The Spanish heist crime drama television series was created by Álex Pina and gained much popularity in 2020. The fifth season of the show premiered this year and people loved to see Professor, Tokyo, Nairobi and other characters on the screen which explains why it became the most searched web show in 2020. The theme song Bella Ciao also got quite the fame because of the popularity of the show.

When you hear the words Scam 1992: The Harshad Mehta Story, you instantly are taken back to the theme music of the song. We all are still hooked to the beats and that's what made this show the second more trendiest web show. The music cannot be given the entire credit, of course, the gripping story, Hansal Mehta's fabulous execution and Pratik Gandhi amazing acting need a mention as well.

Third on the list is Bigg Boss 14! This does not come as a surprise that Bigg Boss was one of the most searched shows for this year. The 14th season is as entertaining as the previous ones and contestants like Rubina Dalaik, Rahul Vaidya, Nikki Tamboli, Jaam Kumar Sanu gained a lot of attention in the BB House. The show continues to be one of the successfully running reality shows currently.

Next, we have Mirzapur 2 on the list! The excitement for the second season of the show was beyond comprehension and when the show hit the internet world, it created a stir amongst the fans. From memes to some really epic scenes going viral on the internet, Mirzapur season 2 received immense love from the audience. Pankaj Tripathi, Ali Fazal, Divyenndu, Shweta Tripathi Sharma, Rasika Dugal and others did a commendable job essaying their characters on the show.

Lastly, we have Paatal Lok on the list. The central theme of the show was well-received by everyone and the most iconic dog scene was a highlight for all. The show produced by Anushka Sharma got positive reviews from the critics and had become the talk of the town when it was released. Jaideep Ahlawat, Neeraj Kabi, Abhishek Banerjee and Gul Panag received a lot of appreciation for the work in this web show.

So these were the top 5 web shows that were trending in 2020. We are sure your favourite show must also have made it to the list. Google's Year in Search 2020 list also included films, celebrities and more. Don't forget to check it all on our website as well.

(The above story first appeared on LatestLY on Dec 09, 2020 05:59 PM IST. For more news and updates on politics, world, sports, entertainment and lifestyle, log on to our website latestly.com).