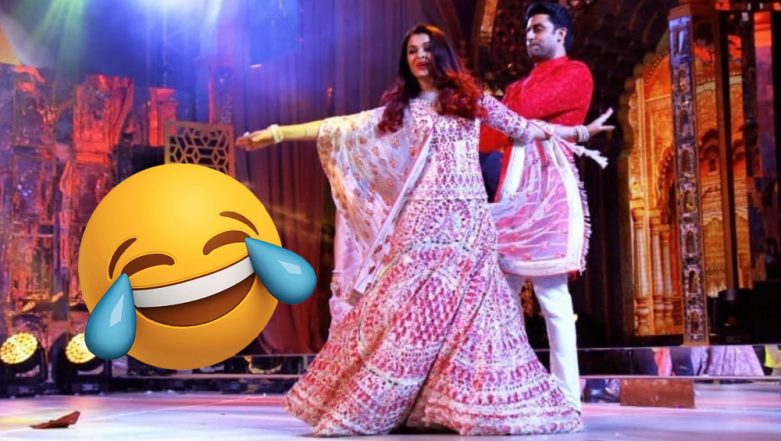 Udaipur seems to be super lit from the past few days. Priyanka Chopra and Nick Jonas had their wedding at Udaipur, and after that, we also saw Isha Ambani and Anand Piramal's sangeet ceremony taking place at Udaipur's The Oberoi Udaivilas and Lake Palace on December 8. The who's who of Bollywood were present there and also some of the most unexpected guests like Beyonce and Hillary Clinton became a part of the lavish ceremony. Biggies from all the major arenas like politics, Bollywood, sports and business attended the pre-wedding ceremony at the Ambanis. Isha Ambani-Anand Piramal Pre-Wedding: The Most Hilarious Tweets on Beyonce, Aishwarya Rai, Abhishek Bachchan, Salman Khan's Sangeet Performances That You Should Read!

The extravagant sangeet ceremony saw major Bollywood stars including Salman Khan, Katrina Kaif, Shah Rukh Khan, Priyanka Chopra and Karan Johar perform at the bash. However, the most talked about performance after Beyonce's was of Aishwarya and Abhishek Bachchan's but for all the hilarious reasons. The two performed on a romantic number, 'Tere Bina' from their movie Guru and while Aishwarya Rai was at her elegant best, it was Abhishek Bachchan's dancing that garnered all the attention. We saw Aishwarya dance like a queen on the song whereas Abhishek danced in minimal moves.

We cannot deny that they looked like a dream while dancing, however, compared to Aishwarya, Abhishek Bachchan's performance was next to nil, we hardly saw him move. And this video of them dancing became fodder for Twitterattis. Here are some hilarious memes made on Aishwarya- Abhishek's performance.

This is just brutal...

Mukesh Ambani was worried that his son will be the worst dancer at the wedding. Then Mukesh Ambani got a brilliant idea and asked Abhishek Bachchan to perform at #IshaAmbaniSangeet pic.twitter.com/lD5rWGGMnV

Abhishek Bachchan is me in group projects pic.twitter.com/eacDw4RHZV

The effort Aishwarya made to come up in life

The effort Abhishek Bachchan made to come up in life.

Nevertheless, the performance was beautiful and they do make an adorable couple and an even more adorable family. Wish we could have seen little Aradhya perform as well.