Jesus, a Dog Was Saved From Drowning at Birmingham Lake on Good Friday, Internet Lauds The Coincidence

Since the joyous news was shared on Twitter, people on social media definitely did not miss the coincidence. 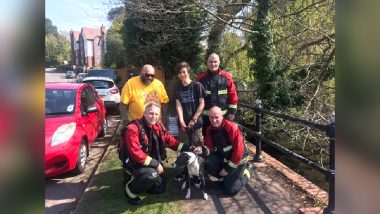 Christians all around the world are ringing in their celebrations of Easter Sunday. In all the joy and happiness commemorating the resurrection of Lord Jesus, the internet also has a lovely story about a dog named Jesus who was saved on the day of Good Friday in Birmingham. The lovely coincidence is not going unnoticed and indeed giving more joy to everyone on Twitter. A four-year-old Staffordshire bull terrier-mix named Jesus was drowning into the lake in Sutton Park. Firefighters were called in for rescues who successfully took the dog out from the water.  It happened on Good Friday, the same day on which Lord Jesus was crucified. Estonians Rescue 'Dog' From Icy River Only to Realise It Was a Wolf, Pictures Go Viral.

The people around were contemplating to jump in the water to get the dog. "The dog had been in the lake for about 30 minutes and was going underneath the water and reappearing, so a decision was made to get a firefighter into the water to retrieve him. The rescue only took five minutes but the owners were overjoyed to have him back," the watch commander Nigel Cox told a news report. Since the joyous news was shared on Twitter, people on social media definitely did not miss the coincidence. Dog Found Struggling to Swim 220 Kilometers in Gulf of Thailand, Oil Rig Crew Rescues The Distressed Animal.

Crews from @SuttonCfld_Fire have rescued a dog from a lake in Sutton Park. The dog was called (and this is no joke) Jesus, he was rescued on #GoodFriday by crews using a triple extension ladder and personal flotation device. #happyEaster2019 pic.twitter.com/EKmPpATw02

It’s not his fault- he thought he could walk on water like his namesake.

Jesus was saved in more ways than one.

A woof from all!

A lot of others were thankful for saving Jesus the dog while some joked if he would make a reappearance on Monday. Well, this clearly is a story of great coincidence. The fire crew was thankful to the public that no one entered the freezing waters.

(The above story first appeared on LatestLY on Apr 21, 2019 03:33 PM IST. For more news and updates on politics, world, sports, entertainment and lifestyle, log on to our website latestly.com).