Jupiter Is Allegedly Hurling Asteroids at Earth, Say Researchers; Twitterati Ask Largest Planet to Back Off With Funny Memes and Jokes 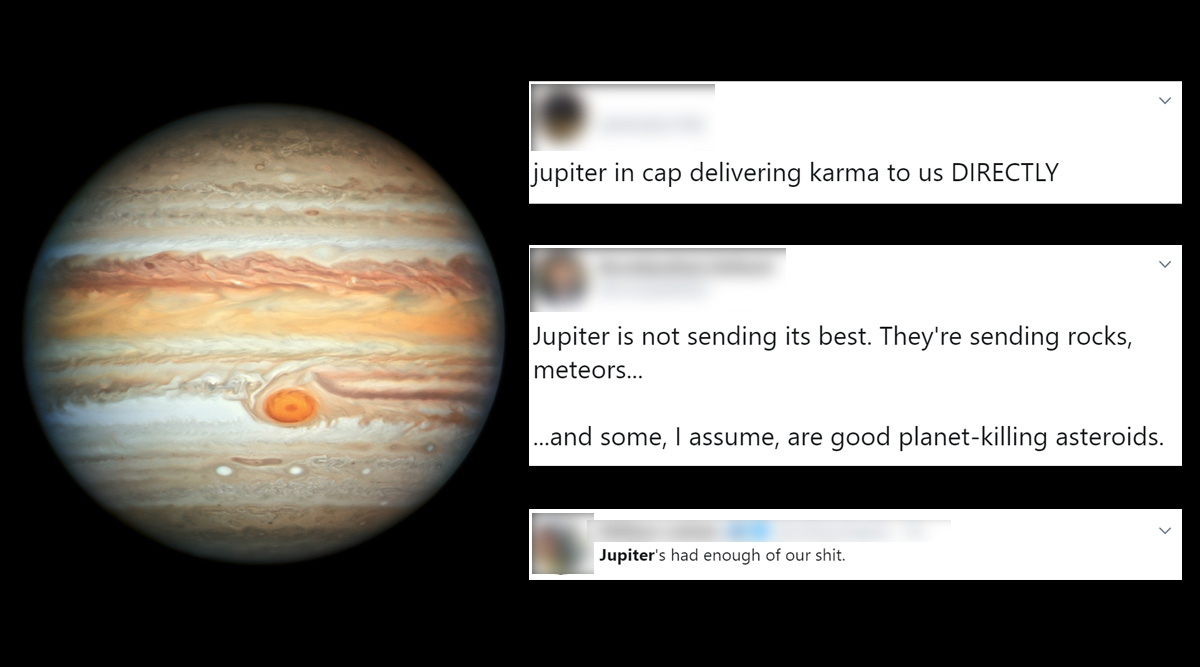 Jupiter is being accused of actively flinging dangerous asteroids into the inner solar system that could affect our planet Earth. The researchers alleged findings contradicts the popular Jupiter Shield theory that proposes the planet acts like a giant space shield due to its huge mass, causing it to deflect dangerous debris. The new research has suggested that it may actually be doing the opposite. As the research has made the headline, Twitterati began to threaten the largest planet to back off, before it’s too late! We don’t know how, but people on Twitter seem to go crazy as they hilariously claim to destroy Jupiter. While some believed that it is ‘Karma’ responding through space, others are intimidating the planet making funny memes and jokes. Astronomers Accidentally Discover 12 New Moons Orbiting Jupiter; The Biggest Planet Now Has a Total of 79 Satellites!

Space expert, Kevin Grazier reportedly published several papers explaining why he thinks Jupiter is a “sniper rather than a shield.” Now he is aiming to prove how this process works. Grazier’s work gives new scientific models that explain the complex processes behind how a celestial object can turn into a threat. He was quoted in Gizmodo, as saying, “Our simulations show that Jupiter is just as likely to send comets at Earth as deflect them away and we’ve seen that in the real solar system.” Rose-Coloured Jupiter: NASA’s Juno Spacecraft Captures Stunning Picture of Massive Storm on Largest Planet.

Grazier reportedly collaborated with NASA’s Jet Propulsion Laboratory and the University of Southern Queensland to explain how the planet could possibly turn passing objects into potentially Earth-threatening comets. Twitter happens not to take it very well! They have flooded the social media platforms with their shocking and hilarious reactions. 470 Light Years Away from Earth, this ‘Hot Jupiter’ Planet is ‘Darker Than Charcoal’, Researches Cannot Even See the Planet.

Jupiter is not sending its best. They're sending rocks, meteors...

...and some, I assume, are good planet-killing asteroids. https://t.co/VnyG86vcC6

Is That All Karma?

jupiter in cap delivering karma to us DIRECTLY https://t.co/QkR9l4kHSx

Even Jupiter is done with our shit. https://t.co/2vRv0GDV0V

Not Everyone Thinks Alike!

everyone quoting this and being like “yeah we deserve it.” i disagree, jupiter is all gas (?? never explained to me properly) and doesn’t have any cool bugs. total chump planet, it’s them or us time to blow it up https://t.co/RJwhbdlUgW

Same energy! If you don’t get it look at trending for Jupiter and then come back lol pic.twitter.com/pAOZ1GpZ5d

Keeping jokes aside, both Grazier and his colleagues have admitted that their models can show how Jupiter picks up debris into its orbit and flings it back out, the planet can act as a shield at the same given time. But he suggested that it is time for the scientists and researchers to study not only the Earth’s surroundings, but what is happening a bit farther away, in Jupiter’s neighbourhood. Comets and asteroids strikes are a cause for concern because they can have devastating impacts on our planet.