Winter in Australia Pics & Videos: From Snowfall to Cuddled-Up Koalas, Mesmerising Winters Day 1 Posts From the Land of Kangaroos Have Taken Over Twitter! 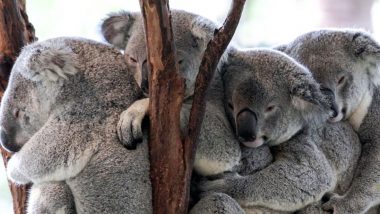 Winters have officially begun in the land of Kangaroos! Australia is experiencing its first day of the chilly weather. Social media is filled with mesmerising pictures and videos from the island country that will take your breath away. Right from snowfall videos to pictures of koalas cuddled up like babies, these pictures and clips perfectly sum up how beautiful the first day of winters looks like in Australia! Australia is a place that experiences seasons at opposite times from the countries in the northern hemisphere. Yes, they celebrate Christmas in winters!  Australia's Decision to Kill 10,000 Camels Because They Drink Excess Water Amid The Severe Bushfire Crisis Sparks Outrage on Twitter.

December to February is summer for the Australians and March to May is autumn. The continent-country experiences winters in the months from June to August. September to November is spring for them, basically everything opposite to that experienced by the countries in the northern hemisphere. However, people are taking to Twitter to share beautiful pics and videos of the country and TBH, it is a sight of respite while the whole globe braves the COVID-19 pandemic. Australia Bushfire Donations: Viral Koala Challenge Resurfaces on the Internet, This Time to Raise Money for Wildfire Victims.

Many people have their morales lowered because of the extended lockdown and these happy pictures and videos make up for a breeze of fresh air. Check out some of the best posts:

First day of winter! Kicking off with light snowfall at Hotham.https://t.co/adDIYmSGyh pic.twitter.com/gOj6lz8zpt

Welcome to the first day of #Winter in #Australia A #snow day at #Hotham! Good #snowfalls are forecast this morning. ⛄️⛄️⛄️ pic.twitter.com/8091lFqwT7

A seven day blizzard has engulfed the wintering team at Australia’s Mawson station.

The icy grip of winter is here! pic.twitter.com/c0eDz0Fmub

Feeling a bit chilly are we guys? ❄️🐨

The koalas at @lonepinekoala sanctuary in @visitbrisbane are looking rather cozy on the first day of #winter here in #Australia. #seeaustralia #thisisqueensland #thisisbrisbane pic.twitter.com/xsOYYgwMdh

2020 didn't start off on a great note for Australia because of the massive Australian Bushfires! The country was facing the worst climate in its history in the months of January February and even last year. The bushfires took away several lives and more than 1 billion animals were estimated to have been killed. Damages to houses, wilds, property and missing people were innumerable. Firefighters were battling round the clock and after a while, the fire was contained.

(The above story first appeared on LatestLY on Jun 01, 2020 03:52 PM IST. For more news and updates on politics, world, sports, entertainment and lifestyle, log on to our website latestly.com).