It started with #2020WorstYear and then coronavirus pandemic began which lead to so many lockdown memes. We saw Carry Minati's YouTube Vs TikTok memes-fest out of nowhere and then BINOD began to trend and went ahead to become the most tweeted meme of the year on Twitter. 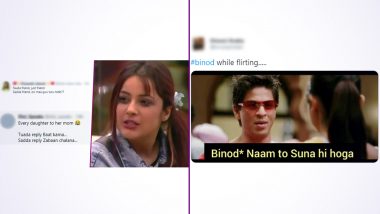 If you had to describe the year 2020 via memes, which one would you choose? Difficult to name just one right?! It started with #2020WorstYear and then coronavirus pandemic began which lead to so many lockdown memes. We saw Carry Minati's YouTube Vs TikTok memes-fest out of nowhere and then BINOD began to trend and went ahead to become the most tweeted meme of the year on Twitter. CBSE and other exams takers made memes this year due to postponement of dates AND we had romantic "Main Tera" Edits. Obviously, we cannot end this without Yashraj Mukhate's "Biggini Shoot" and "Tuada Sadda" memes that made us LOL during this nightmare of a year. And to the shocking number of times, we mumbled "O ma Go, Turu Lub" thanks to the viral video of that little boy. FR though, if it weren't for some these hilarious meme trends this year would have been extremely difficult to brave. But here we are, ending a year where we only stayed at home and ROFLed at some of the best memes and jokes. Let's explain the year 2020 via funny memes and jokes:

We don't know who BINOD is and yet know Binod really well, do you see what we're trying to say. That one comment from a person who wrote his own name in one of the most unrelated videos and was featured in a 'Slay Point' rant about illogical comments. Well, we did enjoy the wave of BINOD memes and jokes that flooded the internet, but turns out it became the most tweeted meme on Twitter. Binod Funny Memes and Jokes: More Hilarious Posts from the Meme Trend That Has Been Flooding Social Media After Slayy Point's Rant Video On YouTube Comments Went Viral.

Cannot deny this at all. It definitely has to be one of the worst years in most of our lives. People took a dig at the year 2020 and how worse it is turning out to be each month. #2020WorstYear trended on Twitter with funny memes and jokes as people looked for respite via humour. #2020WorstYear Funny Memes and Jokes on Twitter Will Bring a Smile on Your Face As You Cope-Up With Devastating News Updates From Around the World.

Everything is happening in 2020 because of humans and we are trending #2020worstyear..

Absolutely relatable and sad at the same time was the "My Plans vs 2020" viral meme trend that would take memorable scenes from movies and TV shows, comparing them with happier beginnings. Just like our lives this year. 'My Plans vs 2020' Funny Memes Take Over Twitter, Netizens Joke About How Disappointing This Year Is Shaping Up to Be!

Remember When We Thought We Were Gonna Die Because of Murder Hornets?

The time soon after coronavirus spread when the news broke that Asian giant hornets, nicknamed as murder hornets were spotted in the United States and Canada for the first time. We were scared and laughing at the same time! Murder Hornets Funny Memes and Jokes Take Over Twitter Displaying How 2020 Keeps Getting Worse!

Yes, hi, I ordered abdominal muscles and a boyfriend for 2020 but instead got a pandemic and murder hornets, can I speak to a manager?

This year amid lockdown, Ramayan re-aired and it made the mythological show more popular than ever amid millennials than ever. Funny Ramayan memes and jokes are proof. Fans loved Lakshman's wit and sassy comebacks. Lord Lakshman was touted as India's first 'Angry Young Man' on social media. Ramayan Funny Memes and Jokes: From Ravana Vadh and Lakshman's Comebacks to Hilarious Posts about Vibhishan and Kumbhkaran, Don't Miss Any Reason To LOL Today! Apart from that characters of Ravan and Hanuman played by Arvind Trivedi and Dara Singh won everyone's heart. In fact, after a video of 82-year-old Arvind Trivedi watching himself as Ravana on the television screen and asking for forgiveness for kidnapping Devi Sita went viral! Check out memes:

The year will also be remembered for the Mahabharata between Youtubers and TikTokers after CarryMinati expressed hate towards TikTokers via his roast video! From his popular catchphrase, "To Kaise Hai Aap Log" to him despising TikTokers, Carry Minati went viral on social media after he broke YouTube with his "YouTube vs TikTok: The End" video.

US Presidential 2020 funny memes and jokes were shared on social media to cope with the exciting and equally moment. Surprisingly (or maybe not) Indians were more interested than ever. US Presidential Election 2020 Funny Memes & Jokes Are Here for Netizens to Cope With the Nail-Biting Moment! As Counting Continues, Hilarious Reactions Take Over Social Media.

The "Main Tera" phase still exists. Right from "Is your boyfriend making a Main Tera Edit for you, or should I give you my number" like hilarious takes on this latest trends to viral videos of beautiful people, usually slo-mo shots compiled together with this part of the Kalank number that goes "Main tera, Main tera" on repeat, you cannot ignore the romantic meme trend this year.   ‘Main Tera’ Edits Funny Memes & Jokes Are Here to Stay! Hilarious Posts Trolling the Desi Version of ‘Play Date’ Trend Go Viral.

Remember when we couldn't get the lines 'Cooker me se channe nikal ke khali cooker chadha diya...', 'Jab mai nahane gayi thi, tab rasode me kaun tha?', 'Ye Rashi thi...' out of our head! This is what shot Yashraj Mukhate to fame. Kokilaben’s dialogue went viral with netizens churning out funny memes and jokes! Kokilaben's 'Rasode Me Kaun Tha?' Funny Memes and Jokes Are Here to Stay! Check out Hilarious Posts If You Are as Clueless as the 'Khali Cooker' Jo Rashi Ne Gas Par Chadha Diya.

The year 2020 even made the official Twitter and Instagram handle of CBSE Headquarters to share hilarious and relatable memes, in a bid to cheer up the students during the board exam 2020. CBSE Shares Funny Memes to Relieve Students From Board Exam 2020 Stress! Check Some of the Best Jokes.

#ExamsCancelled and #CAExams took over Twitter making even the non-students have a hilarious AF reaction. In case, you missed them, we have for you the best #ExamsCancelled funny memes and jokes: #ExamsCancelled Funny Memes and Jokes Are Hilarious AF! Students Trend #CAExams After ICAI Cancels CA May 2020 Exams and Merge It With November Attempt.

This year the rumours that the world’s most infamous, haunted doll Annabelle has escaped from an occult museum made us wanna run to another planet! Well, it was fortunately just a rumour, but netizens couldn't catch a break from funny Annabelle escape memes and jokes. 'Annabelle Escapes' Funny Memes and Jokes Are Here to Stay! Check out Hilarious Posts About How 'Year 2020 Cannot Get Worse'.

annabelle in my room at 3am after she sees me laughing at memes of her pic.twitter.com/h2gVs1hT0f

This year can also be dubbed as "the year of Monoliths" after we are done calling it "the year of Satan". After the discovery and disappearance of Utah monolith, another one appeared in Romania, before mysteriously vanishing. This trend continued for a while, leaving netizens with no option than to make funny memes and jokes online about monoliths. Monolith Funny Memes Join The Buzz of Disappearing Landmarks: Brands Like Amazon, Budweiser, McDonald's Join Netizens to Make Jokes by Installing Their Own Versions of The Rock.

Apart from these, there were many meme trends that took over social media making this year bearable and we are extremely thankful to the meme-makers for this. Life is too short to not LOL at hilarious memes and jokes. So go ahead tell us which one was your favourite!

(The above story first appeared on LatestLY on Dec 22, 2020 05:14 PM IST. For more news and updates on politics, world, sports, entertainment and lifestyle, log on to our website latestly.com).