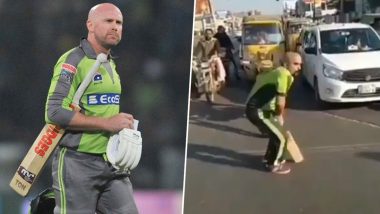 Lahore Qalandars' batsman Ben Dunk enjoyed a sensational run in the 2020 edition of the Pakistan Super League (PSL). The southpaw registered one brilliant score after another and played a crucial role in guiding his side to the semi-finals. Amid his fantastic show, the Australian earned a lot of Pakistani fans and the biggest one of them was recently seen in streets of Pakistan. In a video doing rounds of social media, a bald fan, wearing Qalandars' jersey, can be seen imitating the swashbuckling batsman in the middle of streets. PSL 2020 Semi-Finals and Final Postponed Amid Coronavirus Outbreak in Pakistan.

In the viral video clip, the fan gets off from his bike and starts doing shadow batting. He tried to replicate Dunk's shots and that was evident with his stance and shot-making. Well, knock out matches of PSL might have been postponed amid the coronavirus threat. However, this video of Dunk's fan will certainly entertain you.

@bendunk51 this Pakistani version is incomplete with out # bubble gum pic.twitter.com/ObVMXytgJ8

In the eight matches, Ben Dunk scored 266 at a strike of 186.01. In the list on highest run-scorer of the tournament, the Aussie star is currently placed at the third position. His best knock came against Karachi Kings where he scored 99 runs off mere 40 deliveries and guided his side to an eight-wicket triumph.

Riding on Dunk's scintillating show, Qalandars advanced to the second round and were set to take on Karachi Kings in the second semi-finals of the tournament on March 17. However, the rest of the matches were postponed amid the COVER-19 and the revised dates are yet to be announced.

(The above story first appeared on LatestLY on Mar 21, 2020 02:00 PM IST. For more news and updates on politics, world, sports, entertainment and lifestyle, log on to our website latestly.com).