Chris Gayle Opens up About Racism in Cricket, Says 'I Too Was a Victim of Racism' 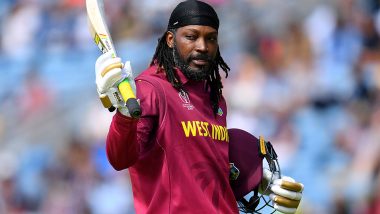 New Delhi, Jun 1 (PTI):  Star West Indies batsman Chris Gayle on Monday said he has faced racist remarks several times in his career because of the colour of his skin, claiming that the gentleman's game was not free of racism.

Gayle did not elaborate what he was told but hinted he faced racism when he plied his trade in various T20 leagues. Gayle's comments have come when the USA is witnessing massive protests following the death of African-American George Floyd, who succumbed to atrocity from a white police officer, Derek Chauvin. Marcus Rashford, Kylian Mbappe, Virgil van Dijk, David Beckham & Others Mourn Death of George Floyd, Liverpool; Barcelona, Man United Post Tweets With Hashtag Black Lives Matter.

"Black lives matter just like any other life. Black people matter, p***k all racist people, stop taking black people for fools, even our own black people wise the p***k up and stop bringing down your own!," Gayle wrote on his Instagram page. 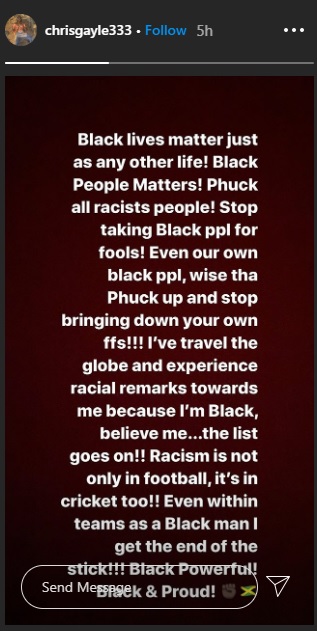 "I have travelled the globe and experience racial remarks towards me because I am black, believe me, the list goes on." "Racism is not only in football, but it's also in cricket too. Even within teams as a black man, I get the end of the stick. Black and powerful. Black and proud," he claimed.