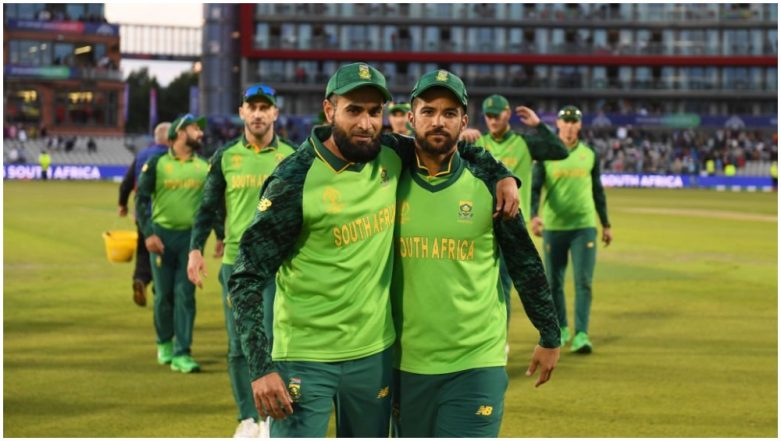 South Africa beat Australia by 10 runs to register its first World Cup victory over the five-time champions since 1992. The victory helped South Africa finish seventh in the points standings with seven points from nine games, while Australia dropped to second after losing their second game in the ICC Cricket World Cup 2019 league stage. They will now take on hosts England in the second semi-final, while table-toppers India play New Zealand in the first.  ICC Cricket World Cup 2019 – Points Table.

The Proteas also bid goodbye to two of their veterans in Imran Tahir and JP Duminy, who retired from ODI cricket. Social media flooded with tributes to both these greats of the game right after South Africa secured the win. Tahir finished with figures of 1/59 in his final ODI game thrilling the crowd with his trademark celebration for one final time in Protea green. Australia vs South Africa Highlights.

The #CWC19 semi-finals are confirmed! 👊 pic.twitter.com/rpnOaeWAzr

Earlier, Quinton de Kock paid the best tribute possible to Indian wicket-keeper MS Dhoni on his 31st birthday. The South African wicket-keeper effected a brilliant run-out in pure Dhoni style to set Twitter rolling. It wasn’t long before netizens found out that De Kock’s run-out of Marcus Stoinis was directly from the Dhoni school of wicket-keeping. Elsewhere, Indian fans thanked South Africa for beating Australia that helped India climb to top of the standings and pit them against fourth-placed New Zealand in Manchester. Take a look at some of those Tweets:

We All Were Confused

His third of #CWC19, 17th of his career in ODIs, and he brings it up with a four! What a tournament he's having! #AUSvSA pic.twitter.com/C6iuhKVqG9

Kohli's reaction after hearing South Africa won against Aussies and we need to battle against NZ#AUSvSA pic.twitter.com/hQZvoh7rkl

Now you are looking at the man responsible for taking India to No.1 spot 🇿🇦👏🏽#AUSvSA #CWC19 pic.twitter.com/XExtqEjD3u

The only South African spinner to take over 100 wickets.

Indian cricket twitter can sleep now! I guess the match’s over. #AUSvSA pic.twitter.com/XzEzKtvJJO

We haven't played Nz in this wc

So lets beat them

And finish eng in the finals

Defeating all the countries and lifting the Cup

Thank You For Everything

What An Emotional World Cup This Has Been!..

Everyone Wants to Play New Zealand

Do you know, India played their Semi Finals in 1983 too at Old Trafford, Manchester? #AUSvSA #INDvNZ#CWC19

Lovely moments of sportsmanship as Duminy and Tahir lead South Africa off the field, for the last time in ODIs. #CWC19 | #AUSvSA pic.twitter.com/WKvQn0IYTe

Meanwhile, Australia were bowled out for 315 with one ball remaining as South Africa clinched a 10-run victory to finish their CWC 2019 campaign with two straight victories. Chasing 326, Australia got off to a poor start with Tahir removing skipper Aaron Finch before Usman Khawaja was forced to retire hurt with a hamstring pull, while Steve Smith, Stoinis and Glenn Maxwell couldn’t last long. David Warner fought hard with a fighting century and was ably supported by Alex Carey (85) but their efforts fell short as Kagiso Rabada (3/56) cleaned up the tail to notch up the victory.

Skipper Faf du Plessis became the first South African centurion in CWC 2019, while Rassie van der Dussen made an important 95 as South Africa posted 325 runs on board after opting to bat first.de Kock also scored a half-century before effecting a brilliant run-out and taking a stunning catch.