Harbhajan Singh retired after scalping 417 wickets in 103 Tests at an average of 32.46. The 2007 T20 World Cup and 2011 World Cup winner is also the first Indian to take a Test hat-trick. The veteran spinner has been showered with wishes on his 42nd birthday by his former Indian teammates. 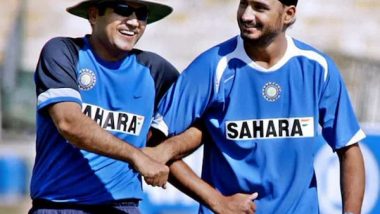 Mumbai (Maharashtra) [India], July 3 (ANI): Indian cricket fraternity extended  birthday wishes to former spinner Harbhajan Singh, as he turned 42 on Sunday, July 3. The Board of Control for Cricket in India (BCCI) took to Twitter to mention all the records achieved by the veteran spinner and wrote, "367 intl. games, 711 intl. wickets and 3,569 intl. runs st Indian to scalp a Test hat-trick 2007 World T20 & 2011 World Cup-winner Here's wishing @harbhajan_singh- one of the finest to represent #TeamIndia - a very happy birthday."

Former India batter Virender Sehwag twitted, "Old is gold, wishing a match-winner and a guy who tries to keep the atmosphere jovial everywhere he goes, my friend @harbhajan_singh a very happy birthday."

"Happiest Birthday Bhajju Pa @harbhajan_singh. Wish you loads of success & happiness. Lots of love to you and your family. See you soon #HappyBirthdayBhajjuPa," former India batter, Suresh Raina wished Harbhajan on his special day on Twitter.

"Happy Birthday Bhajji pa! You may be done with bowling, but you can never be done with entertaining! Keep shining brother @harbhajan_singh."

In December, last year, Harbhajan announced his retirement from the all forms of cricket. The 41-year-old played 103 Tests, 236 ODIs and 28 T20Is for the Men in Blue. He scalped 294 wickets in limited-overs cricket.

The veteran spinner played his last red-ball match against Sri Lanka in 2015 while his last ODI was against South Africa in the same year. The off-break spinner wore the team India shirt for the last time against UAE in the 2016 Asia Cup. Since then, he had not been called up for the national duty by the Indian Cricket Board.

Harbhajan retired after scalping 417 wickets in 103 Tests at an average of 32.46. The 2007 T20 World Cup and 2011 World Cup winner is also the first Indian to take a Test hat-trick. Overall, the Jalandhar- born cricketer has played 367 international games, claimed 711 international wickets and scored 3,569 international runs. (ANI)