IPL 2020: MS Dhoni & Team CSK to Train for One Week in Chennai Before Leaving for UAE: Reports 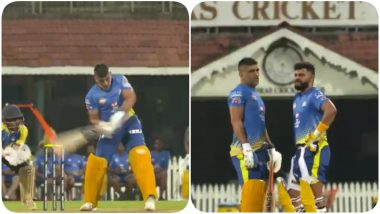 MS Dhoni and team Chennai Super Kings will be training for a week in Chennai before proceeding to UAE for the upcoming season of the IPL 2020. Ever since dates for the IPL 2020 have been announced and the players have started gearing up for the upcoming season. The teams have already started the procedures for the process of quarantining the players. The Chennai Super Kings have asked the players to report to Chennai after the BCCI announces final SOPs. It is said that team has already gotten a nod from the state government for the same. CSK Squad for IPL 2020 in UAE: Check Updated Players' List of Chennai Super Kings Team Led by MS Dhoni for Indian Premier League Season 13.

As per a report published in The Times of India, the players will be gathering in the city on August 14. Their training will start the training from the next day.  The report further adds that the team is scheduled to fly for Dubai on August 21. Prior to this, the Yellow Army wanted to reach a week earlier to Dubai to acclimatise themselves with the conditions in the country. But owing to the reason of the bio-secure bubble, the teams were asked by the IPL governing council to leave only after August 20th 2020.

The players like MS Dhoni, Suresh Raina and others have resumed with their outdoor training but they haven't played competitive cricket for a while now and thus they would have training sessions out there once they reach UAE. Talking about the IPL 2020, the matches will be played in Dubai, Sharjah and Abu Dhabi. The fans and players are equally excited for the much-awaited tournament to stat soon.

(The above story first appeared on LatestLY on Aug 09, 2020 04:09 PM IST. For more news and updates on politics, world, sports, entertainment and lifestyle, log on to our website latestly.com).