It's sunny at the Old Trafford and the toss also happened on time. We are just minutes away from the game to begin.

The good news for the fans is that yesterday it did not rain in Manchester so it leaves a very minimal chance of the rains. The Caribbean team once faced a washout in the CWC 2019 and would not want this game to take the same route.

Manchester Weather Updates Live
Here's how the rest of the day n Manchester looks. There would be cloud until 9 PM. The temperatures will drop by one or two-degree centigrade after 9.00 PM. Check out the snapshot below: 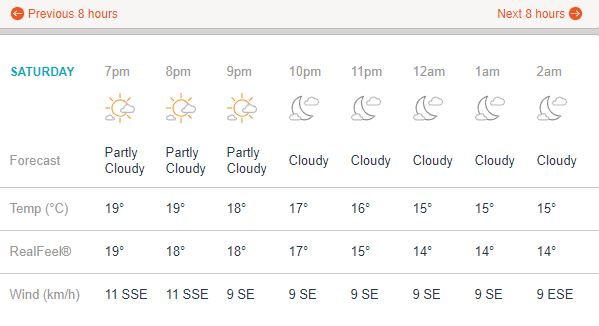 Manchester Weather Updates Live
The Accuweather suggests that the game would witness cloudy weather. At the start of the game, the mercury would hover at around 21-23 degree centigrade. Check out the snapshot of the weather below:

Snapshot of the weather in the afternoon (Photo Credits: Accuweather.com)

As per Accuweather.com, the stadium will witness winds at the pacer of 13-15 kmph and are expected to slow down once the game proceeds.

As per Accuweather.com, there is a minimal chance of the rains and the play could get interrupted.  However, with minimal showers, there could be no major loss of overs.

Hi and welcome to the live updates of West Indies vs New Zealand.

So the second game for the day will be between West Indies and New Zealand in the ICC Cricket World Cup 2019 at the Old Trafford Cricket Ground in Manchester, England. The match number 29 is quite an important game for West Indies as the team is on the verge of getting knocked out of the CWC 2019. One hand, where the Windies have suffered from three straight defeats, the Kiwis have looked promising right from the start. The Kiwis would want to look to continue with their winning streak. The team will have to win all the remaining games of ICC Cricket World Cup 2019 to stay in the contention of the semi-finals.  For now, Latestly.com bring you the weather updates and the rain forecast and weather updates of Manchester. West Indies vs New Zealand Cricket Score 29th ODI Match.

The weather forecast as per Accuweather suggests irregular periods of cloudy skies and sunshine. However, there is a minimal chance of rain which means the game could be obstructed due to rain gods in Manchester. We are sure that the fans are praying for the Rain Gods to stay away. As they desperately need those two points to stay in the contest.

Talking about the Windies team, the Caribbean won against Pakistan comprehensively by seven wickets but they faced three major setbacks against Australia, England and Bangladesh. This proved to be fatal for the team. Whereas, New Zealand has so far won all the game CWC 2019 games. It wouldn't be wrong to say that Jason Holder's men face an uphill task. The team would surely want the rain to stay away because if one may recall, their match against Sri Lanka got washed out due to rain. Jason Holder's men surely wouldn't want this game against the Kiwis to take a similar route. Stay tuned to this page to get live weather updates of the game and the weather.