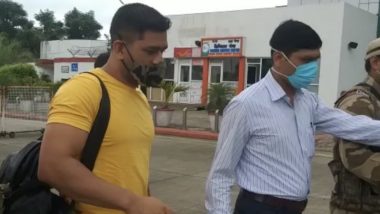 After Suresh Raina and others from team Chennai Super Kings leaving their respective cities, here was another image that was a kind of the most awaited one. It was Thalla MS Dhoni who left his hometown and will fly to Chennai for a week-long camp in Chennai.  The Chennai Super Kings Captain has already reached Chennai. The camp will be conducted behind close doors with no fans present in the stadium. The state government has given a nod to team CSK for conducting a camp behind the closed doors. The picture of MS Dhoni leaving for Chennai cropped up online and the fans could not contain their excitement. IPL 2020 Top Stories, August 14.

MS Dhoni has been out of action since the 2019 CWC. He had appeared for the practice session ahead of the IPL 2020 which was supposed to be held in March 2020. However, the teams were sent back to their homes after the outbreak of the coronavirus. Now with the pictures of MS Dhoni cropping up online, the fans couldn't keep calm and they started posting tweets on social media. No sooner they did that, Dhoni was one of the top trends on social media. Dhoni was spotted wearing a mask and a yellow t-shirt which is the official colour of the Chennai Super Kings. Check out the picture and the reactions below:

Look at his fitness 😍 his biceps 🔥

THE DAY #MSDhoni is gonna b on field, crowd is gonna go super crazy #UAEwelcomesIPL2020 ❤❤❤❤❤ Mahi we r waiting 💞

The IPL 2020 is supposed to start from September 19, 2020, in UAE. The matches will be held across Dubai, Sharjah and the Abu Dhabi. The fans are quite excited for the IPL 2020.

(The above story first appeared on LatestLY on Aug 14, 2020 04:51 PM IST. For more news and updates on politics, world, sports, entertainment and lifestyle, log on to our website latestly.com).