While a lot of cricket couldn't take place in 2020 due to the COVID-19 pandemic, many players entertained their fans with antics on social media. Former Indian opener Wasim Jaffer and Aussie dasher David Warner certainly top the list and can visit their pages to verify the fact. As 2020 is on the verge of getting over, IPL franchise hailed the duo for their entertainment. 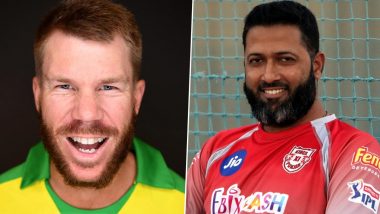 2020 has indeed been a terrible year for cricket fans as major series and tournaments were postponed or cancelled left, right and centre. While the ICC T20 World Cup 2020 got delayed to 2021, the Indian Premier League (IPL) 2020 took place in October-November instead of April-May. Nevertheless, several cricket stars continued to entertain the fans with their strong social media game. Former Indian opener Wasim Jaffer and Aussie dasher David Warner certainly top the list and can visit their pages to verify the fact. Warner’s Instagram page is flooded with hilarious dance and TikTok videos while Jaffer presented a meme in every situation. Twitterati Decode Wasim Jaffer’s Secret Message to India Captain Ajinkya Rahane.

As the year 2020 is about to get over, IPL franchise Rajasthan Royals took to Instagram and lauded the duo for their continuous entertainment on social media. The franchise shared a morphed video comprising of Warner’s dancing clips and Jaffer’s hilarious memes. 2020 a year to forget? From today we’re starting a countdown that will make you “#RememberTheYear for good reasons! @davidwarner31 with the moves & @wasimjaffer14 with the memes, this pair made us go ROFL,” read the caption of the post. David Warner Turns Hrithik Roshan in Latest Instagram Video.

Meanwhile, both Jaffer and Warner are currently concentrating on the ongoing India vs Australia Test where the Aussies are enjoying a 1-0 in the four-match series. After a clinical show in Adelaide, Tim Paine’s men must be high on confidence and will like to clinch the Boxing Day Test as well. Moreover, Warner – who sustained a hamstring injury in the ODI series – is expected to feature in the second Test at the Melbourne Cricket Ground (MCG) which will boost up Australia’s confidence even more.

(The above story first appeared on LatestLY on Dec 22, 2020 03:42 PM IST. For more news and updates on politics, world, sports, entertainment and lifestyle, log on to our website latestly.com).