Rohit Sharma Will Miss His ‘Squad’ As He Heads to US for India vs West Indies, 2019 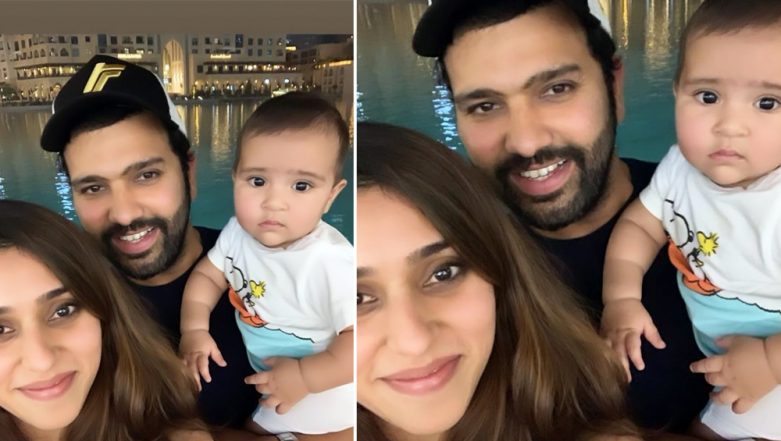 After the ouster from the CWC 2019, the Indian cricket team had a break of three weeks before the Men in Blue headed for their next assignment. The Indian cricket team will be travelling to US for the T20 games, ODIs and Test matches. Ahead of the gruelling season, the cricketers let their hair down with respective families and loved ones to unwind themselves. Rohit Shama was seen spending a lot of time with his wife Ritika and daughter Samaira. But as all good things come to an end, the vacation to is over and Rohit Sharma will now fly to US for the series against West Indies along with Team India. Rohit Sharma Enjoys Sunday With Daughter Samaira Before Leaving for West Indies Tour, Watch Video.

Just before leaving, Rohit Sharma posted a picture with his wife and darling daughter on social media. The happy-looking snap had a sad caption which read, “Gonna miss my squad 😞.” Ritika was equally sad with hubby leaving for national duties and responded with a comment below. In fact, Ritika also posted a picture which had a caricature of a girl saying bye-bye to an aeroplane to express her sadness.

Check out their posts below: 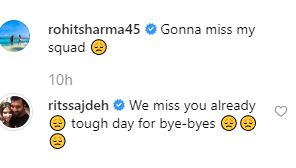 When both your boys leave you on the same night 😓

India will play three T20Is against West Indies and an equal number of ODIs. The Men in Blue will also play a couple of Test matches against West Indies.  Talking about the team, Hardik Pandya has been rested from all the three formats. Jasprit Bumrah will not be playing the shorter format and will be seen in action during test matches. Whereas, MS Dhoni has excused himself from the series and will be joining the paramilitary forces. The first T20I will be held on August 3, 2019.