RR vs RCB IPL 2020 Dream11 Team: Virat Kohli, Jofra Archer and Other Key Players You Must Pick in Your Fantasy Playing XI

Royal Challengers Bangalore (RCB) will start as the favourites despite their defeat to Kings XI Punjab in the last meeting. Kohli’s men have been in fine form and have won five of the eight games they have played. Rajasthan Royals, on the other, are placed seventh in the points table with only two wins and have lost five of their last six games. 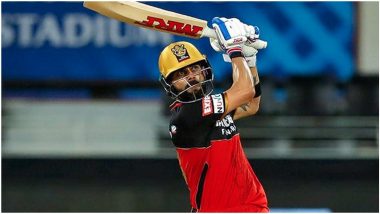 The 2020 IPL in the UAE heat is not going to plan for the Rajasthan Royals (RR) who have lost four out of their last five games. They next face the Royal Challengers Bangalore (RCB) in the first game of the weekend double header. Currently languishing at 7th in the points table with 6 points in 8 games, the Royals have a lot of catching up to do. But there is still plenty of cricket left in the tournament and a string of victories can quickly change the dynamics. Opponents RCB are doing well at third but a surprise defeat to Kings XI Punjab was a real setback. RR vs RCB Preview: 7 Things You Need to Know About Dream11 IPL 2020 Match 33.

Dream11 fantasy gaming platform is quite popular among cricket fans who select their teams to win some cash. Team selection with best picks is always a winning formula in Dream11. The Dream11 fantasy pick has plenty of superstars to choose from in the Royal Challengers Bangalore vs Rajasthan Royals game. Let us look at our five players who are bound to have their presence in every fantasy team for RR vs RCB match. Royal Challengers Bangalore Look to Get Tactics Right as They Face Rajasthan Royals

304 runs in eight games is not the ideal stats for Virat Kohli but looking at the horror start he had, the RCB skipper has managed to get going effortlessly. There have been times where boundaries have dried up for him but he more than makes it up with his quick running between the wickets.

The Rajasthan Royals player won a few games for his team in the initial phase and was a hot pick in the Dream Eleven. While the runs have dried out for him, pointing to lack of consistency, he is an ideal pick in the team considering he bats up the order. RCB’s bowling lack variation and this is where Sanju Samson can pick them up easily.

Not a bad pick for the vice-captain in Dream11. The England international has picked up 12 wickets in 8 games at an average of 22.25. If he manages to get the better of the RCB top order, Rajasthan have a real chance of winning this game.

The wicket-keeper slot in the team should defiantly go to AB de Villiers ahead of Jos Butler. The former South African skipper’s ability to hit towering sixes towards the death overs gives him the edge in T20 cricket. He got out cheaply in the last innings and will be eager to make amends against Rajasthan.

Probably the best spinner in the league, RCB’s Yuzi Chahal has managed 11 wickets so far in the 2020 IPL. He is an attacking spinner who is not afraid to toss the ball up even though there is a risk of going the distance. An economy rate of below 8 means Chahal has been hugely successful so far.

Royal Challengers Bangalore (RCB) will certainly start as the favourites despite their defeat to Kings XI Punjab in the last meeting. Kohli’s men have been in fine form and have won five of the eight games they have played. Rajasthan Royals, on the other, are placed seventh in the points table with only two wins and have lost five of their last six games.

(The above story first appeared on LatestLY on Oct 16, 2020 06:26 PM IST. For more news and updates on politics, world, sports, entertainment and lifestyle, log on to our website latestly.com).