Jofra Archer’s heroics enthralled fans as they heaped praises on the RR speedster. Joining the bandwagon, Indian cricket legend Sachin Tendulkar also lauded the Barbados-born cricketer but in a hilarious manner. Taking to his Twitter page, the former Mumbai Indians captain opined that Archer seemed like changing a light bulb. 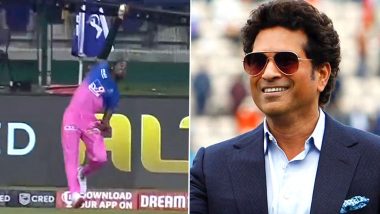 Meanwhile, Mumbai Indians posted 195/6 at the Sheikh Zayed Stadium in Abu Dhabi thanks to significant contributions from Ishan Kishan, Suryakumar Yadav and a fiery half-century from Hardik Pandya. However, the massive total didn’t prove to be enough as Ben Stokes registered a fiery half-century, helping his side recorded an eight-wicket triumph.

With this victory, the Men in Pink just didn’t maintain their hopes of making to the top four but also knocked out Chennai Super Kings of the playoff race. On the other hand, Mumbai remained at the top position despite a loss and will be raring to win their next game to seal a playoff berth.

(The above story first appeared on LatestLY on Oct 26, 2020 05:26 PM IST. For more news and updates on politics, world, sports, entertainment and lifestyle, log on to our website latestly.com).