Trent Boult became the first New Zealand player and second in ICC Cricket World Cup 2019 to take a hat-trick. The Left-arm pacer achieved the feat during the New Zealand vs Australia game (NZ vs AUS) game at the Lord’s Cricket Ground in London 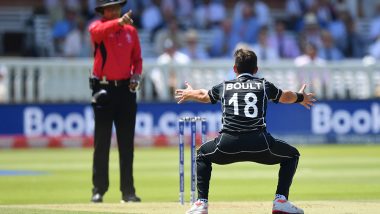 Boult became the second player after Mohammed Shami to achieve the feat in CWC 2019. He achieved the feat in the final over of the Australian innings and his victims include Usman Khawaja (88), Mitchell Starc and Jason Behrendorff. Both Starc and Behrendorff were dismissed for a first-ball duck. Both Khawaja and Starc were cleaned bowled in the third and fourth delivery of the 50th over, while Behrandorff was trapped plumb in front of the wicket. He reviewed the out decision but couldn’t prevent Boult from registering history.

Earlier, Shami had become the first bowler to reach the landmark in CWC 2019. He did it in India vs Afghanistan game in Southampton. Incidentally, both Shami and Boult’s hat-tricks came in the final over of the opposition’s innings. Chetan Sharma (1987) of India was the first player to register a hat-trick at the World Cups, while Lasith Malinga (2007 & 2011) is the only player to have recorded the achievement twice in World Cup’s history. Mohammed Shami Becomes First Bowler to Take a Hat-Trick in CWC 2019 During IND vs AFG Match; Joins Elite List of Players to Have Taken World Cup Hat-Tricks.

Meanwhile, Australia were restricted to 243/9 in 50 overs. Boult finished with figures of 10 overs, 1 maiden, 51 runs and 4 wickets, while Lockie Ferguson (2/49) and Jimmy Neesham (2/28) chipped in with two wickets each. Khawaja was the top scorer for Australia with 88 runs from 129 deliveries.

(The above story first appeared on LatestLY on Jun 29, 2019 09:52 PM IST. For more news and updates on politics, world, sports, entertainment and lifestyle, log on to our website latestly.com).