Unmukt Chand Turns Commentator for IND vs BAN U19 CWC 2020 Final, Fans React After Listening to the Victorious 2012 U19 World Cup Captain

What does Unmukt Chand do now? Fans were eager to know after first hearing him on air during the India U19 vs Pakistan U19 World Cup 2020 semi-finals. Chand, the centurion in the final of 2012 Under-19 World Cup against Australia and the Player of the Final, now plays for Uttarakhand in the Indian domestic circuit. 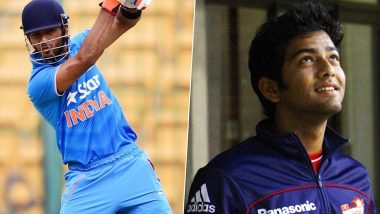 You think of any U19 World Cup star from India and among the names of many superstars, Unmukt Chand’s name appears too. Like many of his predecessors and ones that followed, Chand too was a superstar in making. When he led the Indian U19 team to World Cup glory in 2012 – becoming only the third after Mohammad Kaif and Virat Kohli to do so – Chand was deemed special. Another of the many batting gems to emerge from India. But fast forward eight years as India U19 once again prepares themselves for another ICC U19 World Cup final, Chand is nowhere to be seen. Of course, he isn’t part of the 2019-20 class of youngsters, he had conquered it long back. But where is he?? Chand is in the commentary box for the India U19 vs Bangladesh U19 ICC World Cup final. He is part of Star Sports’ broadcaster team. India vs Bangladesh Live Score ICC U19 Cricket World Cup 2020 Final.

What does Chand do now? Fans were eager to know after first hearing him on air during the India U19 vs Pakistan U19 World Cup 2020 semi-finals. Chand, the centurion in the final of 2012 Under-19 World Cup against Australia and the Player of the Final, now plays for Uttarakhand in the Indian domestic circuit. He originally hails from Delhi and even played from them in the Ranji Trophy before being axed for under-performance and disciplinary issues. Senior Indian Cricket Team Enjoys IND vs BAN ICC U19 CWC 2020 Final Match, View Photo.

What Happened to Unmukt Chand?

Where is Unmukt Chand?

Where is Unmukt Chand now????

Looking at Unmukt chand scores and rest of the player's scores. I think it is good for Garg that he failed 😂

A Century in World Cup Final, Then Lost

Unmukt Chand is in commentary. Really felt bad for this guy who never got opportunity in Team India despite scoring in Finals of Under 19 Final.#U19CWCFinal #U19CWC #INDvBAN

Will Jaiswal make into indian team or he would be a flopped story like Unmukt chand?experts your view please?#staraikelungal

Not Everyone Makes the Indian Team

We thought the same about Unmukt Chand.

Reality is, not many make it.

The 26-year-old has also penned a book titled “The Sky is the Limit” where he notes down his memories from the victorious 2012 ICC U19 Cricket World Cup. Once dubbed, “Very Very Special Chand” – a name once bestowed to Laxman – for his incredible performances against Australia, Chand is yet to make an appearance for the senior Indian national team. He has also gone unsold at the IPL auctions for the last four editions.

(The above story first appeared on LatestLY on Feb 09, 2020 05:01 PM IST. For more news and updates on politics, world, sports, entertainment and lifestyle, log on to our website latestly.com).