Virat Kohli Slams Ahmedabad Pitch Critics Ahead of India vs England 4th Test 2021, Says ‘No One Said Anything About Pitch When We Lost in New Zealand Inside 3 Days’ (Watch Video)

The pitch at the Narendra Modi Cricket Stadium in Ahmedabad has been a hot topic of debate ever since India defeated England in the third Test within two days. As the track favoured the spinners right from the start, several cricket experts, including Michael Vaughan and Monty Panesar, slammed the home team for preparing such pitches. 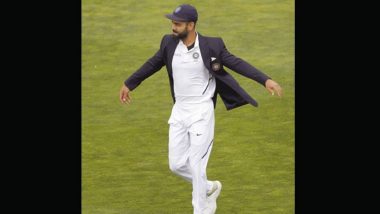 The pitch at the Narendra Modi Cricket Stadium in Ahmedabad has been a hot topic of debate ever since India defeated England in the third Test within two days. As the track favoured the spinners right from the start, several cricket experts, including Michael Vaughan and Monty Panesar, slammed the home team for preparing such pitches. Ahead of the fourth Test, which also takes place at the same Ahmedabad stadium, Virat Kohli was asked to comment on the hullabaloo over the spin-friendly tracks, and the Indian skipper came up with an apt response. Rohit Sharma ‘Wonders’ How Ahmedabad Pitch Will Behave.

"I believe there is too much noise about spinning tracks. I am sure if our media is in a space to contradict those views or present views which say that it is unfair to criticise only spin tracks, then it will be a balanced conversation," Kohli said in the pre-match press conference. How to Watch India vs England 4th Test 2021 Live Streaming Online on Disney+ Hotstar?

"But the unfortunate bit is everyone plays along with that narrative and keeps making it news till the time it is relevant. And then a Test match happens, if you win on day 4 or 5, no one says anything, but if it finishes in two days, everyone pounces on the same issue," he added.

💬 "Unfortunate that there’s too much noise about spinning tracks."

Ahead of the fourth @Paytm #INDvENG Test, #TeamIndia skipper @imVkohli weighs in on the discussion about pitches. pic.twitter.com/tcra6nj5Ys

Citing the example of India's 2020 tour to New Zealand where India lost the series 0-2, Kohli mentioned that both Tests ended within three days, but there wasn't any criticism of the tracks. Instead, the Indian team was blamed for their poor show in seam-friendly conditions.

"I am sure even our people never wrote about the pitch when we lost in three days in New Zealand. It has always been the case that spinning tracks are criticised but when the ball seams a lot and teams are bundled out for 40-50, no one talks about it," Kohli added.

On being asked about what must be done to ensure that Test matches don't end in two-three days, Kohli quipped: "Do you play the game to win it or to make sure it goes to five days, and there is entertainment?"

The 32-year-old came up with another stern response on being asked if the Test community needed to look at the fact that surfaces generally give home teams an advantage. "Would be lovely if you ask us this when we are on an England, Australia or New Zealand tour, not right after we have won on two spinning tracks at home," he opined.

Meanwhile, India have an unassailable 2-1 lead in the four-match series, but they still need to win the fourth and last Test to secure a place in the ICC World Test Championship final. The high-voltage encounter gets underway on Thursday (March 4) at the Narendra Modi Cricket Stadium in Ahmedabad.

(The above story first appeared on LatestLY on Mar 03, 2021 05:04 PM IST. For more news and updates on politics, world, sports, entertainment and lifestyle, log on to our website latestly.com).