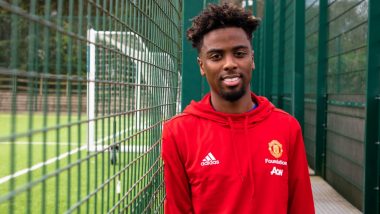 Manchester, August 9: England U-17 World Cup winner Angel Gomes has completed a move to French club Lille on a five-year contract following his departure from Manchester United, the Ligue 1 club announced on Sunday. The attacking midfielder has been immediately loaned out to Portuguese club Boavista for the 2020-21 campaign, Lille said.

"We're delighted to officially announce the signing of @England U20 attacking midfielder Angel Gomes in a deal that runs until 2025. Angel will spend the 2020/21 campaign on loan at @boavistaoficial," Lille said on their official Twitter handle. Manchester United Forward Mason Greenwood Pays Tribute to Departing Teammate Angel Gomes With Goal Celebration (Watch Video).

Gomes started his career at Manchester United at the age of five and made his first-team debut, aged 16, in May 2017, becoming the youngest player to represent the club since Duncan Edwards in 1953.

Meanwhile, Liverpool manager Jurgen Klopp said that the club winning the title after Chelsea beat second-placed Manchester City was one of the best football moments he has ever had while not being in the stadium.

Chelsea beat City 2-1 on June 26 which confirmed that the Premier League title would go to Liverpool. It was the Merseyside giants' first ever title in the league and their first in the English top flight in three decades.

"Counting the minutes, it was just incredible and absolutely one of the best football moments I've ever had in my life with not being in a stadium," Klopp explains in LFCTV's aGolden Sky: Klopp's Champions' documentary.

"Because we were there together you could see each face. Players were sitting there, some couldn't really watch it and stuff like this. We were all like this and it was absolutely exceptional."

(The above story first appeared on LatestLY on Aug 09, 2020 09:11 PM IST. For more news and updates on politics, world, sports, entertainment and lifestyle, log on to our website latestly.com).