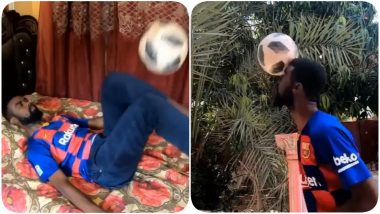 New prodigies have always impressed Barcelona. Not very long ago, six-year-old Arat Hosseini from Iran had impressed the Catalan Giants and even Lionel Messi was quite impressed with the kid. Now here’s another talent who has impressed Barcelona and they have shared the video of this man who can even spin the ball on a spoon while munching on something. Yes! You read it right! This time it a freestyle footballer named Abdullah Emad from Sudan who has impressed the Catalan Giants and they went on to share the video of this man.  Six-Year-Old Lionel Messi Fan Arat Hosseini, Showcases Sumptuous Skills in Viral Video.

In the video we see the freestyle footballer balancing the ball on the head while swinging in the courtyard. Abdullah also balances the ball on his forehead while cycling and then spins the ball on the nib of the pen. He further holds the pen by his mouth and pulls off the stunt quite easily donning the jersey of Barcelona. Needless to say that these skills caught the attention of the netizens who made his video viral on social media. From Abdullah’s social media, we get to know that he is also a mining engineer. Thus Barcelona also shared the video on their social media accounts and Abdullah also thanked the Catalan Giants for their praises. You can check out the video below:

Prior to this, Arat Hosseini was labelled as the junior GOAT by the club. Arat who is also a fan of Lionel Messi was on cloud nine when he got a reply from the six-time Ballon d'Or winner. Messi responded to the video with the words, “Thanks Arat !! I see a lot of class there, impressive! 😉👍🏻 Hug !”

(The above story first appeared on LatestLY on Jun 03, 2020 04:05 PM IST. For more news and updates on politics, world, sports, entertainment and lifestyle, log on to our website latestly.com).