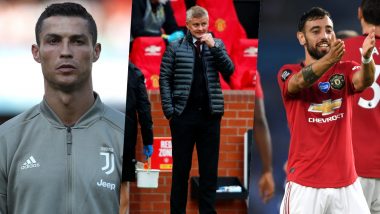 Manchester United manager Ole Gunnar Solskjaer has revealed that he contacted Cristiano Ronaldo to enquire about Bruno Fernandes before making the decision to sign the Portuguese playmaker in January. Fernandes, who joined United from Sporting Lisbon this January for a reported £67.6 million, has brought a great change in the team’s playing style and has already contributed seven goals and as many assists in that period. And according to Solskjaer, Ronaldo had a hand in helping to bring the Portuguese to Old Trafford where he had already effected a change in the team atmosphere. Bruno Fernandes Equals Cristiano Ronaldo’s this Prolific Record With Latest Premier League Player of the Month Award.

Fernandes has been United’s best player ever since joining them and has already contributed towards 14 goals (7 goals and 7 assists) in just 11 Premier League games. But United were not so confident of signing him last summer attributing that doubts of his overt risk-taking. And so to clear his doubts, Solskjaer decided to contact Cristiano and discuss his Portugal teammate. Cristiano Ronaldo Transfer News Latest Update: Portuguese Star Determined to Stay and Win Trophies at Juventus.

"We’ve got the chief scouts who do all the scouting, we’ve got the analysts who analyse and break everything down to the minutest detail. But you can see that with your eye really what talent and quality you’ve got," Solskjaer was quoted by Express UK as saying to High-Performance Podcast.

So far Fernandes has definitely lived up to the expectations. He assisted Anthony Martial in the 2-2 draw against Southampton in Premier League 2019-20 on Monday. "He’s got the talent, of course. You can see the quality is there and we’ve seen that for a long time," said Solskjaer. "But then again he steps up when it matters and he does it when it matters.

Solskjaer also lauded the 25-year-old for his humility and humbleness despite coming to the club with a big price tag. "The first day at the club he shook everyone’s hand. He didn’t come in here thinking, ‘I’m the big shot, you follow me,” said the Norwegian. Fernandes has been class and Solskjaer will certainly need him to be at his best as United head to the business end of Premier League.

United had a great opportunity to climb to third with a home win against Southampton Monday but were pegged back to a 2-2 draw despite leading for the majority of the match. Southampton started better at Old Trafford and took the lead after taking great advantage of some sloppiness from Paul Pogba. Stuart Armstrong fired the Saints ahead in the 12th minute. But United took the lead 11 minutes later with Marcus Rashford and Anthony Martial scoring two minutes apart.

Rashford also had a goal cancelled for off-side while United were also guilty of fumbling a number of great opportunities. But despite a number of missed chances, United led Southampton 2-1 until injury-time when substitute Michael Obafemi netted the equalizer from the game’s final corner in the 96th minute. The 20-year-old showed great resilience and composure in holding off Victor Lindelof and helping Southampton return with a point.

The draw kept United fifth in the Premier League points table with 59 points from 35 matches. They are one point behind third-placed Chelsea and separated from on goal different from Leicester City at fourth. But with Crystal Palace and West Ham in their next two fixtures – both teams are bottom-half of the standings – and Leicester in their final match, United will certainly back themselves to finish in the top four and qualify for the UEFA Champions League next season.

(The above story first appeared on LatestLY on Jul 14, 2020 12:30 PM IST. For more news and updates on politics, world, sports, entertainment and lifestyle, log on to our website latestly.com).