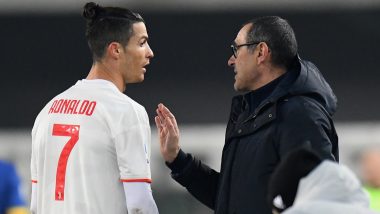 Cristiano Ronaldo was in the news for scoring his first free-kick for Juventus against Torino last night. With 25 goals in one season, Ronaldo broke a 60-year-old record. While the netizens were busy celebrating the record, the TV cameras on the ground captured an interaction with Maurizio Sarri as the two had a conversation with each other. The moment was shared by a fan on social media and the video of the same is going viral. The two had an interaction where the Juventus manager was giving some advice to the five-time Ballon d’Or winner had a bizarre reaction to it.  Here's what exactly happened. Cristiano Ronaldo Hails Gianluigi Buffon for a Record-Breaking Appearance, Has an Important Message for Team Juventus.

Just before the half-time, Sarri was seen giving some advice to the Portugal star to which he was seen rolling his eyes and walked on the ground by shaking his head. Now one of the fans shared the moment on social media and the video is now going viral.

Ronaldo has a high opinion of Sarri’s advice 🤣🤣🤣 pic.twitter.com/idnko4PUsq

Talking about the match, Juventus won the game 4-1. Cristiano Ronaldo netted the 55th goal of his career and was quite elated to do so. Paulo Dybala, Juan Cuadrado and Ronaldo were the ones who scored a goal during the game. During the post-match conference Sarri went on to reveal his conversation with Ronaldo and he said, "I honestly didn't think it was (a problem) but at the end of the match, he came to me and said 'finally'." Juventus continues to stand on number one position of the Serie A 2019-20 points table.

(The above story first appeared on LatestLY on Jul 05, 2020 04:58 PM IST. For more news and updates on politics, world, sports, entertainment and lifestyle, log on to our website latestly.com).