Douglas Costa Says He Considered Retiring Due to Injury Issues 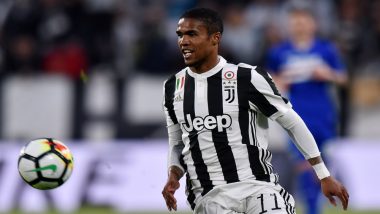 Turin, May 26: Brazil and Juventus forward Douglas Costa said that he had considered retiring due to his frequent injury troubles and has hired a mental coach to help him deal with the side-effects of his fitness issues. "There are times when I think: ‘Can I still play?'" he told The Players' Tribune. "[That's] because I go out on the pitch and get injured again. Then, when I watch it on TV, I remember this is my passion and that I can still play at a high level.

"This is what keeps me alive, I know football comes easy to me. It has nothing to do with money or being famous. "The point is to do what you enjoy and have fun doing it. That's my objective. I joke with Alex Sandro that I've had more scans than I've played games." Not Cristiano Ronaldo, Paulo Dybala Is Douglas Costa's Strongest Teammate in Juventus Side!

Costa, who turns 30 in September, was among the foremost wingers in the world during his time at Bayern Munich but injuries have stunted his development at Juventus since he completed his permanent move to the Italian champions in 2018.

He has missed 17 games in three spells for the Serie A leaders this season alone, and has particularly struggled with hamstring and calf issues during his career. The injury problems have also led to him making just over 30 appearances for Brazil.

(The above story first appeared on LatestLY on May 26, 2020 09:15 PM IST. For more news and updates on politics, world, sports, entertainment and lifestyle, log on to our website latestly.com).