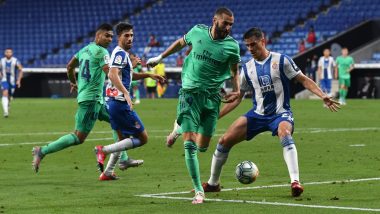 Karim Benzema’s moment of magic inspired Real Madrid to an important 1-0 win over Espanyol and move two points clear in the La Liga 2109-20 points table. With Barcelona held to 2-2 draw at Celta Vigo, Zinedine Zidane’s men needed a win against relegation-threatened Espanyol to open up a point-gap at the tabletop. But Real found it difficult to break the deadlock and almost went behind in the opening three minutes if not for Raphael Varane’s timely block. That sprung Real back into action but Espanyol held fort and both sides were heading into half-time goalless before Benzema exquisite backheel tracked Casemiro’s run and put Real ahead. Casemiro Strike Sends Real Madrid Two Points Clear at the Top.

The assist sent social media into delirium with many calling it the ‘pass of the season.’ Some also compared it to a similar skill from former Real Madrid midfielder Guti, who had fed Benzema with a similar ball against Deportivo La Coruna in 2010. This time though, Benzema was not the scorer but the creator. Benzema’s moment of brilliance came in the final minute of the first half.

Karim Benzema With a Sensational Assist

Karim Benzema with a sensational 10th Assist of the season, carrying the scoring and assuring responsibilities on his F1 while Casemiro with IMMENSE finish!! pic.twitter.com/9Sse65AC37

Pushed away from goal just as half-time approached, Benzema left Espanyol biting the dust with a wonderful piece of skill. The Frenchman took a touch, saw Casemiro running from the midfield and produced an outrageous backheel through the legs of Bernardo Espinosa and into Casemiro’s path putting the ball on a platter for him to open the scoring.

Backheel assist is in Real Madrid DNA. Benzema learned it from the magician Guti. #HalaMadrid pic.twitter.com/5VUH6pnAjK

“For me, it was just football,” Benzema later told Goal after the final whistle. “I knew that Casemiro was behind me, but for me, that was just normal football.” His incredible backheel sent Madrid to top of the points table and also widen the gap in the standings making their La Liga title win almost imminent with only six games to go.

(The above story first appeared on LatestLY on Jun 29, 2020 10:50 AM IST. For more news and updates on politics, world, sports, entertainment and lifestyle, log on to our website latestly.com).