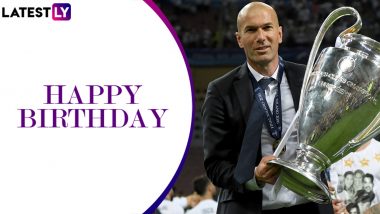 Real Madrid and France legend Zinedine Zidane celebrates his 48th birthday today (June 23, 2020). Very few people in the footballing world can enjoy as much success as Zizou has experienced both as a player and manager. The Frenchman is a multiple time Champions League winner with Los Blancos and on his birthday, we take a look at some of his major career achievements as the manager of the record Spanish champions. Zinedine Zidane Completes Huge Milestone As Real Madrid Manager, Joins Exclusive Club of Coaches With 3–1 La Liga 2019–20 Win Over Eibar.

Born in Marseille, France, Zidane began his playing career at Cannes but achieved the majority of his success as a player at Juventus and Real Madrid. Known as one of the greatest ever to take the field, the French midfield maestro has now established himself as one of the top managers in the world. The former Real Madrid player began his coaching career at Los Blancos’ youth academy (RM Castilla) before taking charge of the first team in 2016.

(The above story first appeared on LatestLY on Jun 23, 2020 10:00 AM IST. For more news and updates on politics, world, sports, entertainment and lifestyle, log on to our website latestly.com).