Despite there not being the same intensity as that of the summer transfer window which saw Lionel Messi and Cristiano Ronaldo move, there were some key transfers that stood as highlights in January. Let us take a recap of some major transfers from Europe's top clubs. 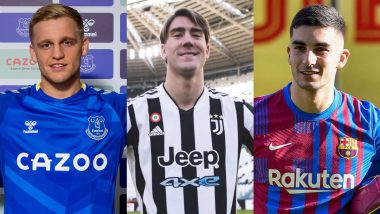 The winter transfer window for the 2021-22 season has officially come to an end. While some clubs made some power-packed signings to improve their performance in the remaining half of the season, others managed to offload some players so that their wage bill could be lightened. This transfer window did not witness as much drama and excitement as was the case during the summer when big names like Cristiano Ronaldo and Lionel Messi changed club colours. But still, there were some significant movements with a lot of big clubs like Juventus, Manchester City and Barcelona in the mix of the business. January 2022 Transfer Window: From Dusan Vlahovic to Ferran Torres, 5 Most Expensive Signings From This Month

In this article, we shall take a look at some of Europe's top clubs and how they fared in the January Transfer window.

The Bianconeri were indeed one of the busiest sides in the winter as they added some significant reinforcements to their squad. They did a world of good to add that element of threat and power to their attack by signing Dusan Vlahovic, who was a target of many clubs in the transfer window. With Vlahovic, they have found a marksman who has a clear eye for goals and his addition would undoubtedly be of huge help in their pursuit of a Champions League spot. They have further signed Denis Zakaria from Borussia Monchengladbach to add strength to their midfield. Also, they have let go of Dejan Kulusevski and Aaron Ramsey on loan and Rodrigo Bentancur. Overall, they have had a fairly busy and successful transfer window.

Barcelona, like Juventus, had one of the most significant transfer windows as they did a great deal in bolstering their attack. At first, they bought Ferran Torres from Manchester City and then looked to the Premier League for further attacking reinforcements. They did find two good forwards in Adama Traore and Arsenal outcast Pierre-Emerick Aubameyang. Although Barcelona are yet to officially announce Aubameyang's arrival, the Gabon striker was spotted training in his new club colours. Not to forget, they had earlier signed free agent and club great Dani Alves. January 2022 Transfers: Five Best Signings of the Winter Transfer Window

Having the world's richest owners sure does help and Newcastle United surely have proven that they would do everything to remain alive in the Premier League. The Magpies have had a forgettable campaign so far, struggling in the relegation zone at 18th. They have indeed added some quality reinforcements that can surely boost their chances of staying up or even finishing within the top half of the table. The highlight of their transfer window was the signing of Brazilian midfielder Bruno Guimarães from Lyon.

When all clubs looked to make big signings, Everton ensured that they filled up their manager's slot with the appointment of Frank Lampard. The Toffees entrusted their faith on the former Chelsea manager to deliver the goods for them and improve their performance in the Premier League. Lampard's arrival also saw two more players--Dele Alli and Donny van de Beek make their way to Goodison Park.

The English champions, who are on course of retaining the Premier League title, have had a pretty quiet transfer window in January. They only signed striker Julian Alvarez from Argentine club River Plate. Alvarez would remain on loan in Argentina till the end of the season.

Antonio Conte's side did make some important signings in the transfer window with those being Dejan Kulusevski and Rodrigo Bentancur from Juventus. Spurs' managing director Fabio Paratici is said to have had a huge role in bringing these two players from Turin and these additions to the London club would greatly bolster their chances of finishing in the top four.

Christian Eriksen returned to football after suffering from a cardiac arrest last year and he has signed up with Premier League newcomers Brentford. The Danish midfielder has already been one of the best midfielders in England during his stint with Tottenham Hotspur before he left for Inter and has returned to once again light up the Premier League.

Liverpool signed Luis Diaz from Porto and sent out Nathaniel Phillips and Neco Williams on loan. Surprisingly, Manchester United, Arsenal and Chelsea did not sign any one. United let go of Amad Diallo, Anthony Martial, Alex Tuanzebe and Donny van de Beek on loan but did not have a single incoming. As a matter of fact, many had expected that United would be in the lookout for a striker after Mason Greenwood was suspended but that did not happen.

Arsenal let go of Ainsley Maitland-Niles, Calum Chambers, Sead Kolasinac and Pablo Mari and also former captain Pierre-Emerick Aubameyang but have only signed one player--Auston Trusty from Colarado Rapids. Trusty would be with his club till the season ends and return to Arsenal after that.

(The above story first appeared on LatestLY on Feb 01, 2022 11:59 PM IST. For more news and updates on politics, world, sports, entertainment and lifestyle, log on to our website latestly.com).