Juventus vs AS Roma, Serie A 2019–20 Free Live Streaming Online & Match Time in IST: How to Get Live Telecast on TV & Football Score Updates in India? 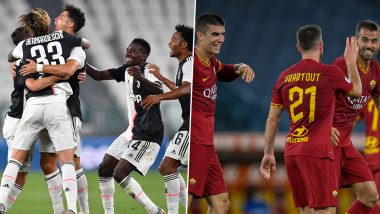 Juventus vs AS Roma, Serie A 2019-20 Live Telecast and Free Live Streaming Online in IST: Juventus may have won the Italian Serie A title but they are struggling at the moment with poor football on part of fatigue leading to losses. In the final league game of the season, they play AS Roma at the Allianz Arena. Maurizio Sarri will have his eyes on Juventus’s UEFA Champions League fixture coming against Lyon where they need to turnaround the tie in their favour. Hence, wholesale changes could be store for the Bianconeri as they wrap up yet another successful title run. Their opponents are destined to finish fifth. Hence, this game is equally meaningless for both sides. Juventus vs AS Roma, Serie A 2019–20: Cristiano Ronaldo, Edin Dzeko and Other Players to Watch Out.

Douglas Costa, Sami Khedira, Mattia De Sciglio and Giorgio Chiellini are all out of the contest owing to injuries. Matthijs de Light and Paulo Dybala took part in training but are unlikely to be given a run considering the Champions League fixtures in mind. Marco Olivieri, Gianluca Frabotta and Simone Muratore get a chance in the starting XI and will look to impress the manager. Cristiano Ronaldo trails Ciro Immobile in the European Golden Shoe race by 4 goals and will start to try and displace the Italian striker from the top spot. Juventus Releases Home Kit For Serie A 2020-21 With Photos of Cristiano Ronaldo & Team Donning The Stripes, Angry Netizens Troll Bianconeri Once Again!

Lorenzo Pellegrini underwent a nose surgery and is out of the Juventus clash while Gianluca Mancini is suspended due to accumulation of cards. Nicolo Zaniolo is likely to pip Carles Perez as the right-sided forward with Edin Dzeko leading the strike force. Justin Kluivert is an interesting option in the attacking third as he has the capability to drag the Juventus defence with his pace and trickery.

When is Juventus vs AS Roma, Serie A 2019-20 Football Match? Know Date, Time and Venue

Juventus vs AS Roma will be the final league game in Serie A 2019-20 for both sides. The match will take place on August 2, 2020 (Saturday midnight). The match will be played at the Allianz Stadium in Turin and has a scheduled start time of 01:15 am IST (Indian Standard Time).

Where to Watch Live Telecast of Juventus vs AS Roma, Serie A 2019-20 Football Match?

Fans can follow the live action of Juventus vs AS Roma match on Sony Sports channels. Sony Sports is the official broadcaster od Serie A 2019-20 in India and will be live telecasting the match online for its fans. Viewers need to tune into Sony Ten 2 and Sony Ten 2HD channels to watch the game live.

How to Get Free Live Streaming Online of Juventus vs AS Roma, Serie A 2019-20 Football Match?

Juventus vs AS Roma match will also be available on online platforms. SonyLiv, the OTT of Sony Sports Network, will be live streaming the match online for its fans in India. Juventus with new players in the starting eleven will struggle to cope up with AS Roma’s intensity and look likely to suffer another setback.

(The above story first appeared on LatestLY on Aug 01, 2020 06:47 PM IST. For more news and updates on politics, world, sports, entertainment and lifestyle, log on to our website latestly.com).