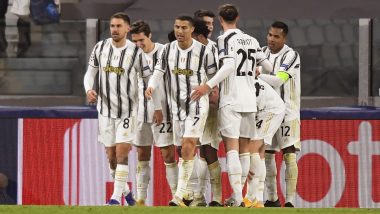 Juventus vs Dynamo Kyiv, UEFA Champions League 2020-21 Live Telecast and Live Streaming Online in IST: Andrea Pirlo’s reign at Juventus so far has been characterised by inconsistency and their latest setback has come in the draw against Benevento at the weekend. The Italian legend will be eager to get back to winning ways when his side play host to Dynamo Kyiv in the Champions League. Although the Bianconeri have qualified for the next round and have very little hope for finishing top, this game assumes significance as there is a bit of discontent amongst fans abut Pirlo’s brand of football.  Opponents Dynamo Kyiv are winless in the Champions League so far but a strong finish could see them make it to the Europa League. Cristiano Ronaldo Trains Hard for a Likely Comeback Against Dynamo Kyiv UCL 2020-21, Check Predicted Staring XI (Watch Video & Pics).

Merih Demiral and Giorgio Chiellini have returned to first-team training and will be pushing for a start against Kyiv. Cristiano Ronaldo and Alvaro Morata remain the preferred front two for Andrea Pirlo with Weston McKennie and Adrien Rabiot lining up as the box to box midfielder. Aaron Ramsey will make way for Dejan Kulusevski in the starting eleven with Juventus opting for more pace on the wide. Italian legend Gianluigi Buffon gets to start between the sticks with Wojciech Szczesny enjoying a breather.

Nazariy Rusyn, Oleksandr Tymchyk, Volodymyr Kostevych and Mykyta Burda have been ruled out of the contest for Dynamo Kyiv. All eyes will be on the defensive unit of the visitors comprising of Oleksandr Karavayev, Ilya Zabarnyi, Denys Popov and Vitaliy Mykolenko battling a world-class attack. Benjamin Verbic is the lone striker in a 4-4-1-1 formation with playmaker Mykola Sharparenko behind him.

Juventus vs Dynamo Kyiv match in UEFA Champions League 2020-21 will take place on December 03, 2020 (Wednesday midnight). The Group G match will be played at the Allianz Stadium in Turin and it is scheduled to start at 01:30 am IST (Indian Standard Time).

Fans in India can enjoy the live action of Juventus vs Dynamo Kyiv Group G UCL match on Sony Sports Channels. Sony Sports is the official broadcaster for UEFA Champions League 2020-21 in India. Fans can live telecast the match on Sony Ten SD and HD channels on their television sets.

Fans can also follow the game live on online platforms. SonyLiv, the OTT of Sony Network, will be live streaming the Juventus vs Dynamo Kyiv Group G match online for fans in India. Juventus have won four out of their last five games against Dynamo Kyiv and should have little trouble defeating the Ukrainian side again.

(The above story first appeared on LatestLY on Dec 02, 2020 04:24 PM IST. For more news and updates on politics, world, sports, entertainment and lifestyle, log on to our website latestly.com).