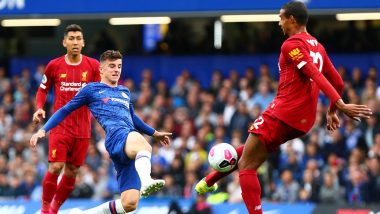 Buoyed by a victory in the FA Cup semi-final against Manchester United, Frank Lampard’s Chelsea travel to Anfield to take on champions Liverpool. The top four race is heating up between Chelsea, Manchester United and Leicester City and with a point separating the three team at the moment, the pressure on the players is beyond gauging. Liverpool have looked frail ever since claiming their first EPL honours. Jurgen Klopp, who builds his game around high temp pressing has not seen his team display the usual intensity in games which is a cause of concern. Liverpool versus Chelsea will be telecasted on Star Sports network and streamed on Hotstar from 12:45 am IST. Liverpool Captain Jordan Henderson, Merseyside Police Request Fans Not to Come to Anfield for Premier League Trophy Celebrations.

Jordan Henderson and Joel Matip continue to miss games for Liverpool which is impacting their performances. James Milner has returned to first team training and will likely start on the bench. Virgil Van Dijk made an uncharacteristic error against Arsenal and it will be interesting to see how he responds against Chelsea tonight. The front three of Mo Salah, Roberto Firmino and Sadio Mane remain unchanged for the hosts. Fabinho in midfield is the star man for the Reds with the Brazilian international dictating the tempo of their play. Liverpool's EPL Title Win Celebrations Rehearsed, Viral Video Shows the Scene at Anfield.

Chelsea have Olivier Giroud in fine form and ahead of their game against Liverpool, Frank Lampard heaped praises on the French striker. He will have Christian Pulisic and Willian for company in the forward line. Mateo Kovacic was hugely impressive against Manchester United wit his break up play and Liverpool will do well to stop the Croatian from dominating proceedings in the middle. Marco Alonso and Recce James are likely to be deployed as wingbacks to give Chelsea the attacking threat in the wider areas.

Liverpool vs Chelsea Premier League clash will be played at Anfield on July 23, 2020 (Thursday). The game has a scheduled time of 12:45 am IST.

Where to Watch Liverpool vs Chelsea, Premier League 2019-20 Football Match on TV?

Premier League 2019-20 can be viewed online on Disney+ Hotstar, the official OTT platform of Star Sports Network. So fans can log onto the Disney+ Hotstar App or Website to get the live streaming of Liverpool vs Chelsea. Liverpool at home will remain unbeaten and if their attackers find feet early on in the contest, a home win for the Reds is the likely outcome.

(The above story first appeared on LatestLY on Jul 22, 2020 07:11 PM IST. For more news and updates on politics, world, sports, entertainment and lifestyle, log on to our website latestly.com).