Liverpool vs Chelsea, Premier League 2019–20: Mo Salah, Olivier Giroud and Other Players to Watch Out in LIV vs CHE Football Match 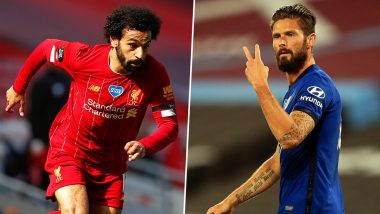 Liverpool will take on Chelsea in the latest round of Premier League 2019-20 fixture. The clash will be played at Anfield on July 22, 2020 (late Wednesday night). Though the focus will very much be on post-match title celebrations, Jurgen Klopp’s still have a job to do on the field. The Reds need to win their remaining two games if they are to match Manchester City’s record of most wins in a single EPL season. Ahead of Premier League 2019–20 Clash, Here Are Last Five Match Results of LIV vs CHE Encounters in EPL.

Liverpool have been inconsistent post lockdown as the Reds have lost more games in their previous seven games than their first 29 matches. But Jurgen Klopp’s team will be eager to take the field and end their home season on a high but face a tough test in Chelsea, who themselves need a win to keep Champions League qualification hopes alive. Liverpool Captain Jordan Henderson, Merseyside Police Request Fans Not to Come to Anfield for Premier League Trophy Celebrations.

Chelsea's European ambition hit a roadblock after their loss to Sheffield, but Leicester and Manchester United dropping points have given them the upper and once again. Frank Lampard’s men are beaming with confidence after consecutive wins over Norwich and Man United and will be looking to keep that run going against the champions of England.

The Egyptian as expected is once again involved in the race for league’s top finisher and will be looking to get closer Jamie Vardy’s tally in tonight’s game. Salah has scored just once in his last five games and will be eager to break that poor run.

The Frenchman has been brilliant since football’s restart and has been on the score sheet in every other game. The 33-year-old has scored four goals in his last eight games, taking his tally to six league goals for the season. Giroud’s form in tonight’s game will be important if Chelsea are to have any chance of defeating Liverpool.

The Brazilian forward is very much important to Jurgen Klopp’s system. Despite playing as the lone number 9, he is the creator in chief for many of their goals. However, Firmino is on a barren spell in front of the goal, the 28-year-old hasn’t scored in his last 13 league games and will be hoping to end that.

The American has been one of the most important players for Frank Lampard post lockdown. His creativity and dribbling ability has been the main source of goals for Chelsea in recent matches and his link-up play with Olivier Giroud will be crucial for the Blues to get past Liverpool backline.

(The above story first appeared on LatestLY on Jul 22, 2020 08:55 PM IST. For more news and updates on politics, world, sports, entertainment and lifestyle, log on to our website latestly.com).