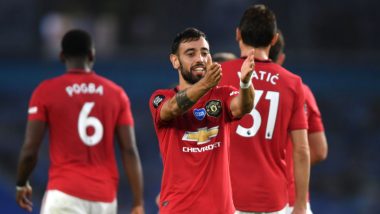 Manchester United have a season-defining game coming up at Old Trafford against West Ham United with their Champions League hopes hinging on its outcome. Leicester City’ morale damaging defeat at the hands of Tottenham Hotspur means the two draws from the remaining two games should be enough for the Red Devils to guarantee a top 4 finish but they will be taking no chances. They were thumped by Chelsea in the FA Cup semi-final which laid bare their defensive fatalities once again on the fore. Opponents West Ham United are safe from the drop zone and can look forward to playing some fearless football tonight. Manchester United versus West Ham United will be telecasted on Star Sports Network and streamed on Hotstar from 10:30 pm. MUN vs WHU Dream11 Prediction in Premier League 2019–20.

Ole Gunnar Solskjaer has a decision to make about David De Gea in the playing eleven after the latest episode of Spaniard’s gaffes which costed the team a FA Cup final slot. Sergio Romero looks likely to start against the Hammers unless Solskjaer has a change of heart. Eric Bailly returned to training after a clash of head against Chelsea cut short his game. Bruno Fernandes has looked tired in the last few games and United need their magical playmaker to be on top form to break the Hammer’s defence. Manchester United Manager Ole Gunnar Solskjaer Defends Under-Fire Custodian David de Gea.

Ryan Fredericks is in doubt for the trip to Old Trafford while Robert Snodgrass is unavailable for West Ham United. Michail Antonio has been scoring goal for fun off late and the English striker is a real handful in the attacking third. Mark Noble has been around for a while and knows what it takes to get results against top sides. Declan Rice will keep things steady in midfield for Hammers with Tomas Soucek giving him company.

Manchester United vs West Ham United Premier League clash will be played at Old Trafford on July 22, 2020 (Wednesday). The game has a scheduled time of 10:30 pm IST.

(The above story first appeared on LatestLY on Jul 22, 2020 04:15 PM IST. For more news and updates on politics, world, sports, entertainment and lifestyle, log on to our website latestly.com).