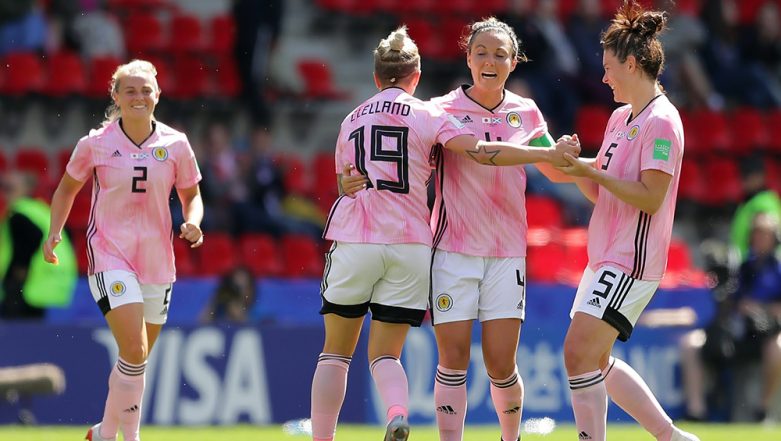 Scotland will lock horns with Argentina in the match no 32 of FIFA Women's World Cup, 2019. The action will take place at Parc des Princes, Paris. This Group D match will be a do or die game for both teams. The other group match will take place at the same time between Japan vs England at Stade de Nice, Nice. Meanwhile, fans in India, who are looking for free live streaming and online stream of Scotland vs Argentina, should scroll down below for details. FIFA Women's World Cup 2019 Schedule Free PDF Download in IST: Fixtures, Groups, Time Table in Indian Time with Venue Details of Football WC in France.

Both Scotland and Argentina need to win this game, if they want to qualify to the round of 16. A draw here would result in the elimination of both sides. Scotland has scored in the two games so far while Argentina has struggled to score a single goal. This could just be enough to draw the difference between Scotland and Argentina which should see Shelley Kerr’s side progress to the last 16. Scotland team skipper is by Rachel Corsie. FIFA Women's World Cup 2019: From Teams to Schedule And Venues, All You Need to Know About the Football Mega Event.

Scotland vs Argentina will take place on June 20, 2019 (Monday), at Parc des Prince, Paris. This decider match Group D of 2019 FIFA Women’s Football World Cup and the start time is at 12:30 AM IST.

If you are not able to tune into television for whatever reasons, you can also catch Scotland vs Argentina FIFA Women’s Football World Cup 2019 match with the live streaming option available on Sony Liv. You can also catch up on the live updates of the game on the official website of FIFA.