Uruguay Squad for 2018 FIFA World Cup in Russia: Lineup, Team Details, Road to Qualification & Players to Watch Out for in Football WC

Uruguay finished second in Group D behind Costa Rica with wins 2-1 and 1-0 wins against England and Italy respectively. 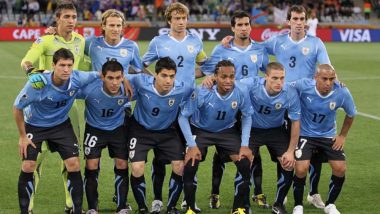 Two-time World Cup winning nation Uruguay has perhaps lost a bit of aura in the past few years but the team on its day can still beat the best of the best. Their coach, 71-year-old veteran Oscar Tabarez in his second spell will lead a national team for the most number of matches. El Maestro as he is fondly called is battling severe medical conditions but his will to coach and passion for football has seen him overcome the difficulties and will be coaching Uruguay for the third time in a World Cup. The squad still has some great players in its ranks and their unity has always been exemplary that should come handy in 2018 FIFA World Cup. We will be taking a look at Uruguay World Cup squad, their team lineup, fixtures, road to qualifications and players to watch out for in Russia. FIFA World Cup 2018 Schedule in IST for PDF Download: Fixtures, Groups, Time Table with Match Timings & Venue Details of Football WC in Russia.

Captain Diego Godin who has been considered as one of the best defenders playing in Europe is ever present at the back to steady the Uruguayan ship. He is flanked by Maxi Pereira and Martin Caceres at the back and the defense looks pretty impressive. Rodrigo Bentancur and Federico Valverde are two players who have risen through the youth ranks and are now regulars with national team occupying the midfield positions. Veteran Cristian Rodriguez and along with Nicolas Lodeiro also have the trust of the coach and will have a major role to play in Russia. 2018 FIFA World Cup Friendlies Fixtures: Check Full Warm-Up Schedule Timetable in Indian Time for Germany, Brazil, Spain, England, Argentina and All 32 Countries.

The strike department is a tale of two of the game’s great No 9’s who link up very well for the national team-Luis Suarez and Edinson Cavani who have a combined tally of 92 goals for Uruguay. They also notch up regular assists which makes them a dangerous pair for the opponents. Luis Suarez Hopes That Mohamed Salah Features in Egypt vs Uruguay 2018 FIFA World Cup Clash.

Uruguay finished second in the South American World Cup qualifiers behind Brazil with 31 points in 18 games. With nine wins, four draws and five losses the Uruguayan side did enough to make their Russian journey a reality. Edison Cavani with 10 goals in the qualifying phase finished as South Americas top goal scorer in the campaign.

Uruguay finished second in Group D behind Costa Rica with wins 2-1 and 1-0 wins against England and Italy respectively. The World Cup came to an end in the round of 16 when they were outclassed 2-0 by Colombia with James Rodriguez scoring the goal of the tournament.

Edinson Cavani: He may have had his tiffs with Neymar with PSG but Cavani to be fair had a really impactful season in France where he did not let a superstar threaten his position in any way possible. Cavani became PSG’s all-time leading goal scorer in the past season and will be full of confidence in Russia.

Luis Suarez: The Barcelona forward scored 26 times this season also had 12 assists to his credit and having scored the most goals for Uruguay with 50 till date, he is one of the modern days ‘maestro’. He will though have to keep his temper in check in Russia as we know his past record is not that clean but off late he has calmed down a bit.

Uruguay vs Uzbekistan is the lone warmup game for the team before they begin their FIFA World Cup 2018 campaign against Egypt on June 15. They will next play Saudi Arabia on June 20 and with Russia on June 25.

(The above story first appeared on LatestLY on May 31, 2018 12:03 AM IST. For more news and updates on politics, world, sports, entertainment and lifestyle, log on to our website latestly.com).