Zlatan Ibrahimovic Shows Off His Well-Chiseled Abs During AC Milan Practice Session, Netizens Ask, ‘Has God Turned Into a Man?’ 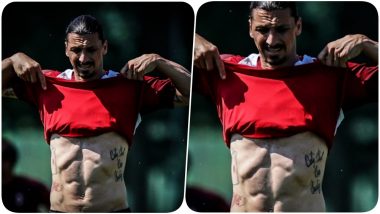 Zlatan Ibrahimovic has returned to the practice session of AC Milan after he picked up an injury in May. The fans are quite elated with the return of the former Manchester United striker and are hoping that he can feature in the match against SPAL. The pictures of Zlatan’s return were shared on the social media handles of the club and the former LA Galaxy player also took to social media to share a few snaps. Now here was one picture where Ibra was seen flaunting his well-chiselled abs. Zlatan Ibrahimovic Returns to AC Milan Group Training For the First Time After his Injury, Could Play the Game Against SPAL.

So far so good, but what caught the attention of the netizens was the caption of the snap which read, “Man's Not Hot.” Generally, Zlatan refers t himself as God and suddenly called himself a man and this confused the netizens. The netizens took to social media and shared their reactions to the snap and asked him if God has turned into a man. Check out the snap and the reactions below:

lol you mean god's not hot??

Thought you were God

Thought u were a god?

Zlatan is very likely to feature in the match against SPAL which is happening on July 2, 2020. However, Zlatan’s fate at AC Milan is still unknown as he got into a verbal spat with the chief executive Ivan Gazidis and accused him of staying too distant. The verbal confrontation reportedly happened on the ground a couple of days before the Coppa Italia semi-finals against Juventus.

(The above story first appeared on LatestLY on Jun 30, 2020 09:53 AM IST. For more news and updates on politics, world, sports, entertainment and lifestyle, log on to our website latestly.com).