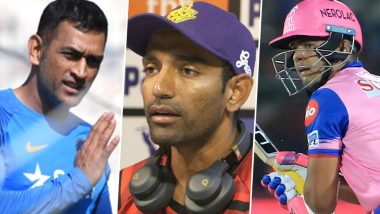 MS Dhoni has not played for India since their defeat in the semi-finals of the 2019 Cricket World Cup against New Zealand. Due to this, there have been speculations of the wicket-keeper taking retirement from the game but nothing has been confirmed yet. With the 38-year-old’s future in doubt, India are looking for his replacement and former Indian cricketer Robin Uthappa believes that young Rajasthan Royals prodigy Riyan Parag could be the answer.  Steve Smith Excited to See How Yashasvi Jaiswal, Riyan Parag Would Perform in IPL 13.

Riyan Parag was bought by the inaugural IPL champions in the 2019 Player Auction and the youngster was one of the brightest sparks of the tournament. The Assam batsman went on to create history in the cash-rich league as he became the youngest batsman to score a half-century in the competition at the age of 17 years and 175 days. Jos Buttler, Robin Uthappa Learning to Cook, Riyan Parag Engrossed in Gaming.

During an interview with Cricfit, Uthappa heaped high praise on the youngster stating that he could be the next MS Dhoni. ‘Currently, the young player which excites me out of my socks in Riyan Parag. I am extremely excited and he is the one to watch out for.’ He said.

‘I think he is someone who is looked after well and dealt well and nurtured well and will represent India for a very long time. He could be India’s answer to the next MS Dhoni,’ Uthappa added.

Parag has sure left a lasting impression on Robin Uthappa who was recently bought by the franchise for the 13th edition of IPL.  A team which consists of superstars such as Jos Buttler, Steve Smith and Ben Dotes, young Parag managed to make his mark and in his five innings, the batsman scored 160 runs with a strike rate of 127.

(The above story first appeared on LatestLY on May 30, 2020 04:32 PM IST. For more news and updates on politics, world, sports, entertainment and lifestyle, log on to our website latestly.com).