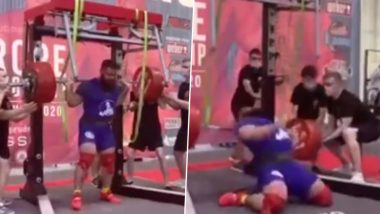 Russian powerlifter Alexander Sedykh suffered a horrific injury after an attempt to squat 400kg (880lb) went horribly wrong. In the gruesome episode, the powerlifter fractured both of his knees and now must learn to walk again. Sedykh was competing at the World Raw Powerlifting Federation (Weightlifting) European Championships in Moscow and was quickly rushed to the hospital following the incident. With IPL 2020 Nearing, Virat Kohli Posts Weightlifting Video; RCB Captain Continues to Work Hard on his Fitness.

Alexander Sedykh entered the tournament as the defending champion but in the video, it could be clearly seen that his knees started to buckle as he holds the barbell with enormous weights in his shoulders and prepares to attempt the squat. Bhavna Tokekar Wins Gold Medal At World Powerlifting Championship in Moscow.

The defending champion looked far from comfortable and as he shifts his weight towards the ground and after some time his knees completely give up under the pressure. Sedykh could be seen screaming in pain. The powerlifter was somewhat lucky as the 400kg bar falls behind him and is caught by the spotters.

Sedykh was immediately taken to the hospital for surgery which lasted around six hours.  According to reports, the defending champions fractured both of his knees and has also ruptured his quadriceps muscle.

In an interview, the Russian powerlifter said that he had to learn to walk again. ‘The main thing is that I must lie motionless in bed for two months. Then I'll be taught how to walk again.’ He said. ‘It'll take time to recuperate. I've had my quadriceps re-sewn and my knees put back together.’ Sedykh added.

(The above story first appeared on LatestLY on Aug 13, 2020 08:22 PM IST. For more news and updates on politics, world, sports, entertainment and lifestyle, log on to our website latestly.com).