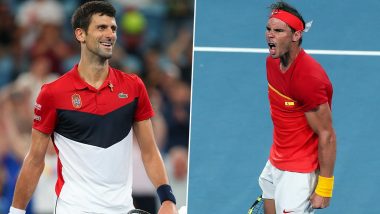 Paris, September 26: Rafael Nadal will be looking to move level with Roger Federer's tally of 20 Grand Slam titles when he starts his campaign at the 2020 French Open which starts on Sunday. The Spaniard, who skipped the US Open, is considered hot favourite to win a record extending 13th title at Roland Garros. Nadal enters the court on Sunday to face the Belarusian, Egor Gerasimov.

Federer is out with a knee injury, but top seed Novak Djokovic and wildcard Andy Murray are in the fray. Meanwhile, in women's singles, Serena Williams will relaunch her bid for a record equalling 24th Grand Slam title. Ashleigh Barty Pulls Out of French Open 2020 Due to Travel Restrictions, Says ‘My Family & My Team Will Always Remain My Priority’.

Without Federer in the tournament, it's a great chance for Nadal and Djokovic to close in on the Swiss legend in their race to finish with the most Grand Slam men's singles titles.

Meanwhile, Dominic Thiem, this year's US Open champion, heads to the tournament as one of the big contenders. The Austrian had reached the final in Paris in the past two years and would want to win the title this time.

The women's draw will miss defending champion Ash Barty and 2020 US Open champion Naomi Osaka. Winner of 2018 Simona Halep will hit the court against Spaniard Sara Sorribes Tormo. Expectations from Halep are high after her wonderful Italian Open win. The French Open will be aired on Star Sports Network from 2.30 pm IST.

(The above story first appeared on LatestLY on Sep 26, 2020 11:52 PM IST. For more news and updates on politics, world, sports, entertainment and lifestyle, log on to our website latestly.com).