Novak Djokovic Pays Rich Tribute to 'Mentor' Kobe Bryant in Australian Open 2020 Winning Speech, Says 'This is a Reminder to All of Us That we Should Stick Together More Than Ever' 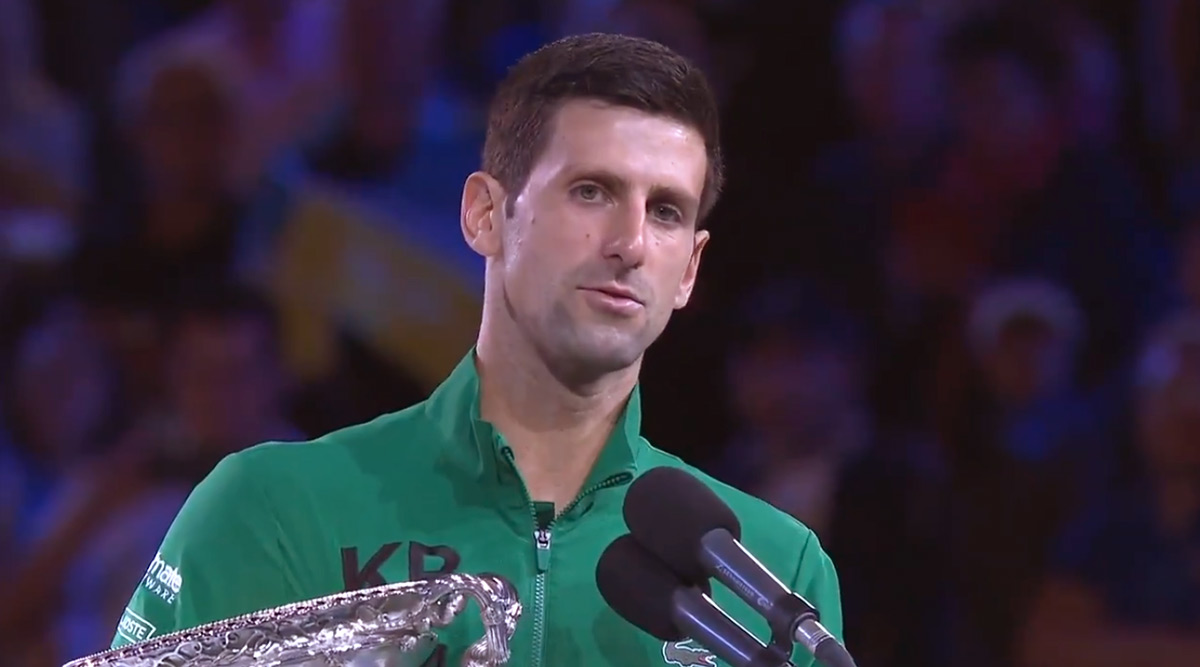 Melbourne, February 2: Novak Djokovic paid rich tributes to late Basketball legend Kobe Bryant in his acceptance speech after winning the Australian Open 2020. The Serbian tennis great called NBA legend Kobe Bryant, who died in a helicopter crash on January 26, 2020, "a mentor to him." Djokovic wore the same jacket with the initials 'KB 8 24' written on it that he wore during an earlier match in the Australian Open on January 28. The 'Djoker' created history by winning the eight Australian Open by beating Austrian Dominic Thiem in a five-set final. This was the 17th major title for the Serbian tennis star and puts him two slams behind Rafael Nadal (19) and three grand slams short of the all-time record holder Roger Federer (20). Novak Djokovic Beats Dominic Thiem to Win Australian Open 2020 Men's Singles Title, Clinches his 8th AO Trophy.

With this year's Australian Open in the bag, Djokovic is all set to reclaim the number 1 spot from Nadal. Djokovic is now also the only player in the open era and second overall after Ken Rosewell, to win Grand Slams in three different decades. However, Djokovic refrained from talking only about tennis in the post-match presentation.

Djokovic mentioned the devastating bushfires in Australia and touched upon the conflicts in some parts of the world. He then went on to call Kobe Bryant "his mentor" and spoke about his death. "This is a reminder to all of us that we should stick together more than ever," said Djokovic in his tribute to Kobe Bryant. Rafael Nadal, Coco Gauff and Nick Kyrgios Pay Emotional Tributes to LA Lakers Legend Kobe Bryant (Watch Video).

"This is a reminder to all of us that we should stick together more than ever." — Novak Djokovic during his #AusOpen final speech. https://t.co/nfFnc8mKg2

Another Clip of His Speech

Novak Djokovic mentions Kobe Bryant being a mentor to him during his acceptance speech after winning the 2020 Australian Open men's final pic.twitter.com/rID28aROJc

Novak Djokovic made a tribute to Kobe and Gianna Bryant after his match at the Australian Open. pic.twitter.com/Bl6OPSEgDB

Earlier too, Novak Djokovic had remembered the late NBA legend Kobe Bryant in the Australian Open, before taking the court for his quarter-final battle with 32nd seeded Milos Raonic at the Rod Laver Arena on January 28, 2020 (Tuesday). Djokovic, who termed Kobe a ‘great mentor and friend’ while mourning the shocking death of the Los Angeles Lakers star on January 26, 2020 (Sunday), wore a zipper that had 'KB 8 and 24' written on it.

Kobe Bryant died in a helicopter crash that occurred in the foggy hills above Calabasas, California, about 30 miles northwest of downtown Los Angeles. Bryant and his 13-year-old daughter Gianna were killed in the crash, along with seven others. The death of the NBA legend caused an outpouring of grief in the sporting fraternity and the world mourned the loss of a great athlete.