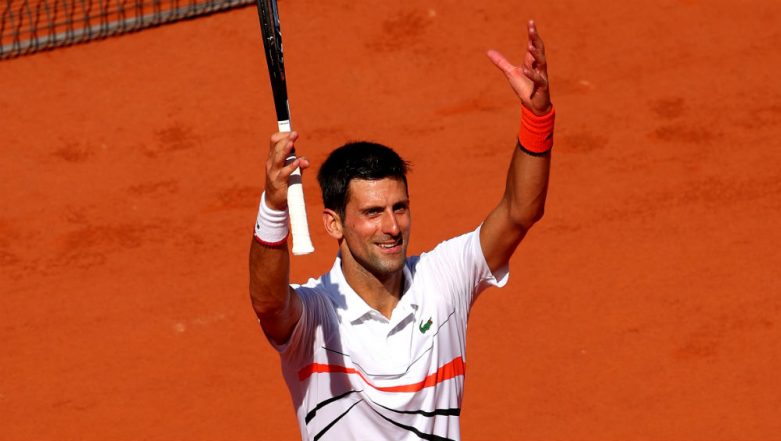 Novak Djokovic will play his fourth round match in French Open 2019 against Jan-Lennard Struff on Monday in the round of 16. The Serbian will take on the German and will look to seal a spot in the quarter final stage of French Open 2019. The World No 1 and top seeded Novak Djokovic is chasing his second Grand Slam at Roland Garros and is also pursuing the calendar slam or 'Novak Slam' after having won the Wimbledon trophy in 2018, US Open 2018 and Australian Open 2019. If you are looking for live telecast and free streaming online details of Novak Djokovic vs Jan-Lennard Struff fourth round (Round of 16) match in French Open 2019, you will find it all here. Also get information on match timings in IST (Indian time) and TV channels doing the live coverage of the game. Novak Djokovic Birthday: ‘Djoker’ Turns 32, Video Proves Why the Serbian Tennis Great Is King of Hearts.

The 32-year-old Novak Djokovic has won 15 Grand Slam titles so far and is number three on the list of players with most number of Grand Slams in Men's Singles tennis. The Serbian is only behind Rafael Nadal (17) and Roger Federer (20) for most number of Grand Slams titles and experts are of the opinion that if anybody can dethrone Federer, it is Novak as he has age on his side. But Djokovic will first have to fend off the challenge by the German on Monday. The World number 1 Djokovic and 45th ranked Jan-Lennard Struff have met only once in a match before, in 2017, and Djokovic had won the match. However, this is their first meeting on clay. Novak Djokovic's Interview as a 7-Year-Old Proves He is a True Champion, Watch Video Where He Says, 'Tennis is a Duty for Me'.

The Novak Djokovic vs Jan-Lennard Struff fourth round match is scheduled to begin at 3.45 PM (Indian Standard Time). The match will be played at the Philippe-Chatrier Court.

The Novak Djokovic vs Jan-Lennard Struff match can also be viewed online. Video streaming platform Hotstar will play the live streaming of the match. Fans can watch the full match on Hotstar.

Novak Djokovic eased into the second round of the French Open 2019 as he defeated Hubert Hurkacz 6-4, 6-2, 6-2 in the first round on Monday. In the second round, he faced Henri Laaksonen and beat the Swiss in straight sets 6-1, 6-4, 6-3 to advance to the third round of Roland Garros 2019. Djokovic faced the 26-year-old Italian Salvatore Caruso and beat him 6-3, 6-3, 6-2 to ease through to the fourth round. While his opponent in fourth round, Jan-Lennard Struff beat World No 13 Borna Coric to seal a spot in round of 16 and face Djokovi for a spot in the quarters.